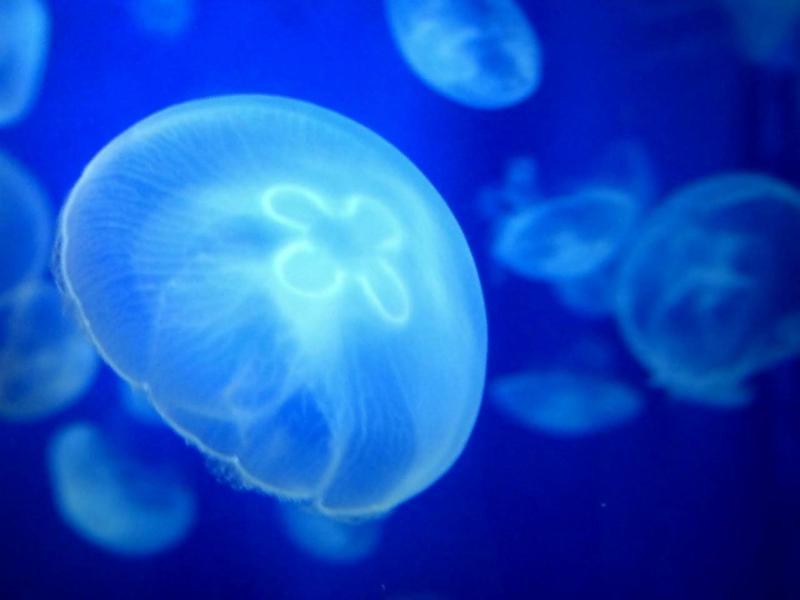 Long long ago, Princess of Ryugu(Dragon’s castle under water) got ill and was told by a fortuneteller.
“Eat the heart of a monkey and you’ll be better.”
King of Ryugu, her father, ordered a jellyfish to bring a monkey.
When she reached an island, a monkey was looking toward the sea on the top of a tree.
“Mr. Monkey, why don’t you come to Ryugu to enjoy yourself?” she said.
“I’d love to, but I can’t swim.” he said.

“You have only to sit on my head.”
“It’s very kind of you.”
The jellyfish with the monkey on her head began to swim lightly on the surface of the sea.
“What a foolish monkey he is that he doesn’t know he’ll be killed and taken away his heart!”
said she to herself, thinking the cheerful monkey on her head.
She couldn’t put up with having a secret by herself.
“To tell the truth, Princess is ill and she need your heart.”
“What!” he was so surprised but he pretended to be calm.
“Why didn’t you tell me about it when we left the beach? My heart is still hanging on the tree.” said the clever monkey.
“We must get it back.” she said, hurrying to the island.
On reaching the island, he jumped down from her head and climbed the tree quickly.
“What a foolish jellyfish you are! We can’t take our heart out of our body.” said the monkey.
The disappointed jellyfish returned Ryugu and told the whole story to King.
“I’ll punish you.” said King, ordering his men to beat her 100 times.
As she was beaten so many times then, she becomes a fish like jelly now.