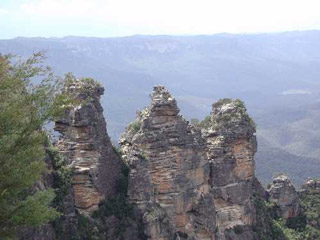 Long long ago, there lived three little sisters in a mountainous area.
One day they were playing on the cliff by throwing many stones toward the valley, where the monster was sleeping and one of them hit and made him awake.
He got very angry and ran them after to catch and eat them.
They ran away from him to their house as fast as possible.
The father was a magician who used a magic stick.
“Father, father, help us. A big snake will eat us.” they cried.
“He is a dangerous monster.
Nobody can escape from him.
I’ll change you into huge rocks by magic.”
said he, changing them into three huge rocks in a moment with the magic stick.
Soon the monster came to the house.
“Where were the three sisters who threw stones at me and made me awake?
I’ll kill and eat them.”
cried the monster.

“I’m their father.
I apologized to you for their disturbing you.”
said the father.

“No, I never forgive them.
Where are they?”
said the monster.

“I changed them into rocks over there.”
he said, pointing the rocks.

“I’ll eat you instead of them.”
cried the monster and ate him up in a minute.

What was worse, the monster broke the magic stick into pieces.
The three sisters have never returned to human beings and they are standing as “three sisters’Rock” even now.