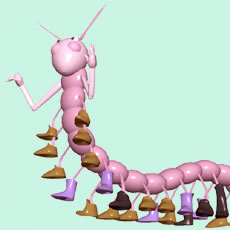 Long long ago, several insects were gathering and talking at the house of a centipede’s in a forest, sitting around the fire.
“It’s a fine day today. Why don’t we have a drinking party at my house?”, said the centipede.
“That’s a good idea.” said a ladybird.
“Everyone should come back home and bring own dish, but who will go to town to buy Sake?” said a butterfly.
“It’s a centipede. Because he has a hundred feet, he can walk faster than anyone else.
He can buy Sake back in an hour.”
said a mosquito.

The insects there returned their home to cook dish and bring it back to the party.
When they came back to the centipede’s house, one hour had already passed.
They saw the centipede at the entrance door of his house.
“Mr. Centipede. Did you also come home now?” asked a cricket.
“No, I’m going to the town.
I’m now putting on my shoes.
It will take me two hours to finish it.”
said the centipede.

The looper went out to the town instead of the centipede as fast as possible, straightening and shortening his body.
By the way, why is Centipede so red? Because his liking for Sake makes him so red.