The old must be thrown away

The old must be thrown away 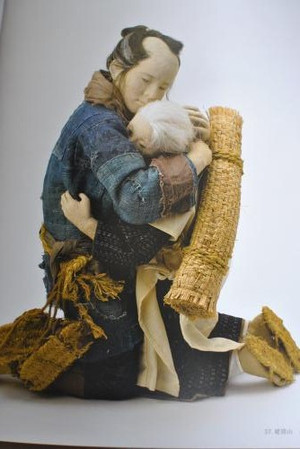 Long long ago, a selfish lord ruled a country, who disliked the old.
One day he ordered his men to set up message boards all over the country.
It said as follows;
‘The old who are over sixty must be thrown away in mountains.
Otherwise all the family will be killed.’

Everybody couldn’t help following his order for fear all the family be killed.
By the way, there lived a young man who had an old mother in the country.
“My son. I am sixty years old. I must be thrown away in the mountain.”
“My Mother. I can’t do such a cruel thing.”

“The next-door old woman and the in-front-of old man have been already thrown away in the mountain.
So you needn’t worry.”

At last the young man unwillingly carried his old mother on his back and climbed up the mountain.
But he failed to leave her there and returned home secretly at night with his mother on his back.
He hid his mother in a dirty barn behind his house.
Several days later, the lord ordered his villagers to make a rope out of ash.
“My Mother. The lord ordered us to make a rope out of ash.
We tried it but impossible.
If somebody can’t do it, we will have to pay more tribute to him.”
“My son. It’s a piece of cake. I’ll teach you.”
The young man made a ring of straw rope, put it into salt water, dried it and burned it as he was told to do.
The young man carefully brought it to the lord.
“You are a skillful man.
It’s wonderful.
So I’ll give you more difficult question.
This is a stick.
You must tell me which end of this is the root and which end is the bough in a few days.”
He took it back to his house.
The young man was at a loss with the stick and asked his old mother for advice.
“It’s a very piece of cake. You have only to bring a basin full of water.”
The young man prepared the basin and put it into the water.
“Look. One end is in water, which is the root. The other is up water, the bough.”
The young man was in front of the lord to tell him the answer.
“You are a clever man.
So I’ll give you a most difficult question.
You must make a drum which give sound without being beaten by a man.”
He came home pale with a drum and went to his mother for help.
“It’s a most piece of cake. You have only to get a few bees in the mountain.”
The mother loosened the leather of the drum a little, put the bees into it and fastened it again.
The drum began to give sound of itself.
The young man handed the sound drum to the lord.
“You are a wonderful man.
Did you solve three difficult questions by yourself?”
“My lord. To tell the truth, it’s not I but my old mother that solved them.
You ordered us to throw away the old, but I couldn’t do such a cruel thing.
I hid her in my barn.
The old know more things than the young, though they work less hard.”
The lord said to him after a long thought.
“You are right.
I was wrong.
I decide to stop throwing away the old any more.”
The lord gave the order all over the country that the young take good care of the old.