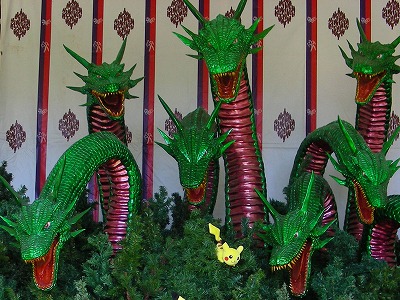 Long long ago, there lived a kind man, who was so kind that he couldn’t but help others in need.
One day,he was away from his village on a trip.
When he reached a small village, he found a young beautiful lady crying in front of a house.
“Why are you crying?” asked he.
“Because, there used to be seven young ladies like me, but a gigantic snake with eight heads came to this village every year to take one lady.
So I’m the last woman to be taken by it.
Tomorrow is the day it will come.”
answered she.

“I feel so sorry for you.
Well, I’ll kill it tomorrow.
First prepare for eight barrels full of Sake (Japanese alcohol), next make eight entrances in the fence of your house and put each barrels near the entrances.
You must sit on the large stone in the garden so that your face can be reflected in the water of eight barrels.
You must never speak, never move, and never run away even if it comes.
I’ll protect you, so you needn’t be worried.
I’ll be always with you.”
said he and hid himself behind the stone.

The brave man with a big sword in his hand and the young beautiful lady waited for the snake to appear.
It got dark, the sky became black, a warm wind flew, and it began to rain.
Something moved in the forest.
Then they saw sixteen red eyes looking at them.
The snake came nearer and nearer to them.
It smelled Sake and saw the lady’s face in the water and put eight heads into the each barrel.
It drank up Sake and slept with eight heads down and sixteen eyes closed.
“It’s time to kill it.”
said he and jumped on one of the heads with his sword.
He cut off one head after another until at last he cut off all the heads and killed the snake.
He was a hero.
After a while the brave man got married to the young beautiful lady.
Their descendants ruled Japan from generation to generation until now.