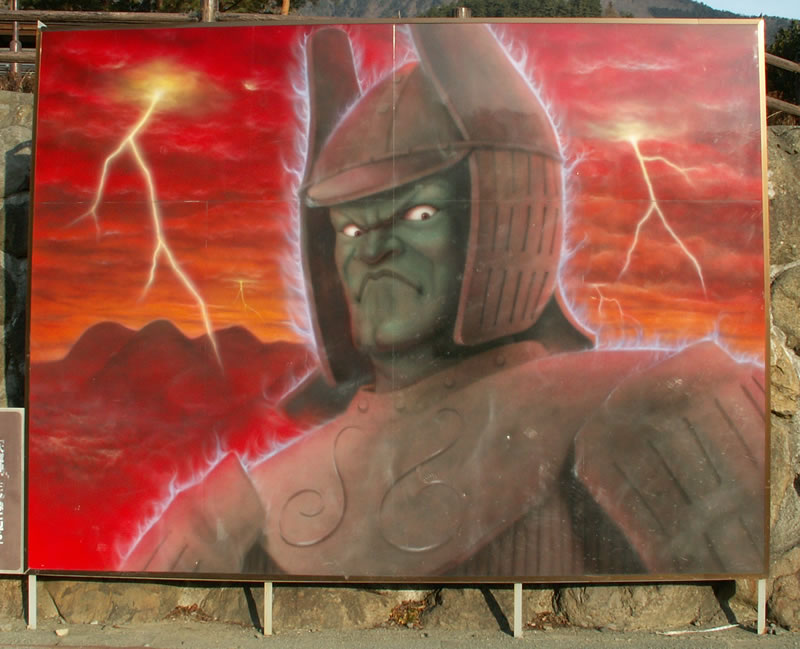 Long long ago, there stood a Haniwa(Clay doll) enshrined at the foot of a hill in a quiet and peaceful village.
It was believed to have protected the village from invaders from outside many, many years ago.
On that year they had a long spell of drought and few crops.
Many villagers were starved to death, but they helped each other to survive.
One day many outsiders attacked the village to get all crops it had.
They killed not only men but also women, girl, children, even babies and those whomever they saw.
The villagers did nothing but being killed by them.
One young lady whose family had been killed ran away from them desperately to reach the Haniwa statue.
“Mr. God, please help us.
Please protect our village from the invaders.”

Prayed she with her eyes full of tears again and again in front of the statue with the depth of heart.
A tear dropped it on the head of the statue, when the sky became dark, the earth began to move, and the statue grew bigger and bigger until it became Daimajin, a gigantic man.
When it crossed his arms in front of its face, he looked very red with rage.
He moved slowly down toward the village with the loud sound of footsteps.
The enemy fought against him with the weapons such as swords, bows and arrows in vain.
They were trampled on or picked up to throw by him.
They scrambled to escape from him until there was no invader in the village.
He turned around and headed for the hill slowly until he arrived at the original place.
On crossing his arms in front of his face again, he began to be smaller and smaller until he looked like a Haniwa statue again.
The village was peaceful again.
It stood quietly, looking down the village.