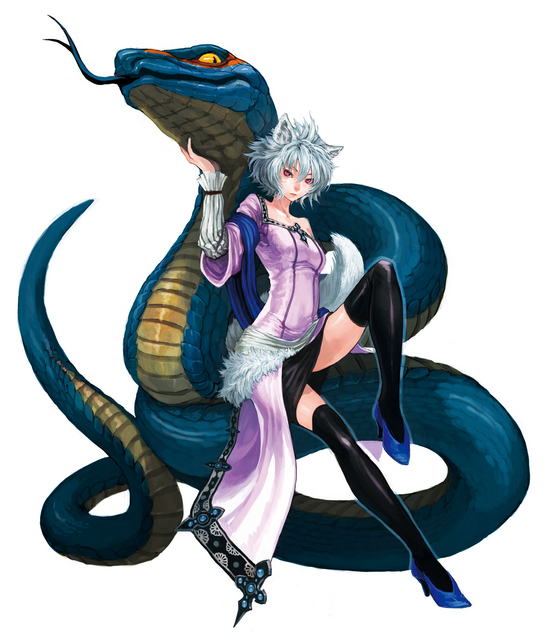 Long long ago, there lived an honest lord and his three daughters in a country.
He was so rich that he had many rice paddies around his house.
One year they had little rain for a few months.
The land was so dry that they couldn’t grow rice.
He was at a loss sitting on the bank, when he saw a snake come to him.
He said to the snake,
“Snake, if you go to heaven to give us water and fill paddies with water, I’ll give you one of my daughters to you.”
On the night of the day, it suddenly began to rain cats and dogs all night.
He was so happy to see the paddies filled with water.
A few days later, he had a strange young handsome man at the front door of his house.
“I’m a snake God living in a lake and I filled your paddies with water as you had told me to do.
Today I came here to take one of your daughters as you had told me. Promise is promise.”
“Oh, my God. What shall I do? But promise is promise.”
First he asked the eldest daughter to marry a snake.
“What do you say? Of course, not. You are crazy.” said she and got angry.
Next he asked the second daughter to marry a snake.
“What do you say? Of course, not. I don’t like you.”
She also got angry, too.
Last he asked the youngest daughter to marry a snake.
“I told the snake to give one of my daughters to him. I have never broken my promise.
“Would you marry him? ” asked the father.
“I don’t want to marry a snake, but we must not break a promise.
I’ll marry him if you wish.”
said she sorrowfully.
She left the house with him on the evening of the day.
A few days later the lord had a strange dream that his youngest daughter in white was standing on the lake and asking him to come in the darkness.
He visited the lake until at last he saw two big snakes appear on the lake.
He never went to the lake without seeing two snakes after he had a dream about her daughter.