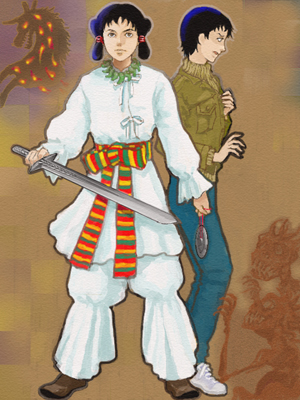 Long long ago, there lived a lord who liked old stories very much in a country.
He called his men and made them tell old stories every night.
They told one old story after another but the lord was never tired of them.
Soon his men completely ran out of their old stories.
They talked and set a board along the streets here and there.
It said:
‘The person who can make the lord say ” I am tired of old stories.” shall have much money.’
Seeing this board, many people in the country applied and told their old stories in front of him.
But the lord asked the tellers one story after another as soon as they finished his story.
So they ran out of his stories.
“Is that all?” asked the lord.
The tellers left the castle without any reward.
One day a young lady went to the lord.
“I’ll tell you old stories until you get tired.” said the lady.
“Are you sure to tell me old stories until I get tired?” said the lord.
“Of course, I can.
But before telling stories, I ask a favor of you.
Whenever I have a pause, you must say, ‘Then what happened?’
If you don’t say so, I can’t speak forward.”
asked she.