A hare of Inaba

A hare of Inaba 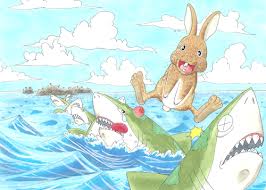 Long long ago, there lived a hare in an island, who one day wanted to go to the opposite cape, but she couldn’t swim.
She thought out an idea and carried it out.
She said to a shark,
“Mr.Shark, which family do you think are bigger, your family and my family?”
“Of course, ours are bigger.” he answered.
“So I’ll count you.
Please gather all of your family together and make them line on the sea from this island to the opposite cape.
I’ll run on them and count the number.
We’ll make out which family are bigger?”
A few days later all sharks lined on the sea and the hare, pretending to count the number, hopped on the back of theirs.
When she jumped down on the cape, she said to them,
“How foolish you are to be deceived by me!
I only wanted to come here.
Thank you very much.”

On knowing they were deceived, they caught and skinned her.
When she was crying, not knowing what to do, the shark said to her,
“If you enter the sea, you’ll be cured.”
When she did as she was told, she had a terrible pain.
“How foolish you are to be deceived by me!
I only deceived you.”
said the shark.

When she was crying, not knowing what to do, a young man passed by her,
“If you wash yourself in the river and powder the pollen of cattails’ on you, you’ll be cured.”
When she did as she was told, she got well until she was a white hare again.