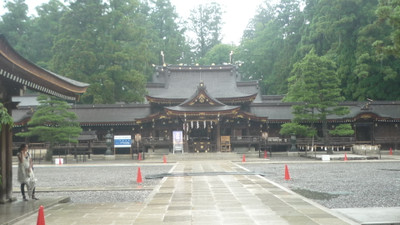 Long long ago, there lived a farmer in a village.
Honest as he was, he was always poor.
Though already forty years old, he had no wife.
One rainy evening, he heard a cat meowing outside his house.
“Whose cat is it? It must have lost its way in the heavy rain.”
he opened the door.

“Whose cat are you?
Oh,you are a cat living in the rich family next to me,aren’t you?
What’s the matter with you?”

He dried her wet fur with a Japanese towel and gave her his remaining rice.
“Though I am poor and there’s no delicious food, I’ll not make you hungry.”
He took great care of her as kindly as possible.
Even when he went to bed, he took her into the bed.
One evening he said to the cat,
“Ms. cat. If you should grind wheat into flour while I am working in a field, how happy I am!”
On the next day, when he returned from the work, he saw, to his great surprise, the cat grind wheat into flour by using a mortar.

“Oh my God!
What a wonderful cat you are to grind wheat into flour!
How happy I am to have such a nice cat like you!”

He made dumplings out of the flour and ate them together with the cat.
Three days later, the cat suddenly spoke a word to him,
“Dear master. I was made to drive away from the former family because I was of no use to them.
As long as I am a cat, I can’t help you perfectly.
So I’ll go to Ise shrine to pray that I can be a human being.”

“What a kind cat you are to think like that!
I hope you’ll be a perfect woman.”
said he and tied a purse around her neck.

A few days later, she showed up as a beautiful human wife and worked hard day and night everyday.
At last the farmer became richer than any other person in the village.