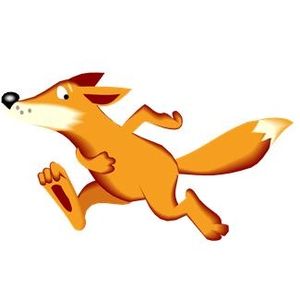 Long long ago, there lived a lazy man in a village.
On the other hand, his wife was a hard worker.
Though it was in the latter days in December, he had never prepared for a happy new year.
His wife said to him,
“It is a happy new Year tomorrow, but you are always only lying on the bed. What on earth are you thinking of?”
“Don’t be so angry. I have my own idea.” said he without thinking of tomorrow.
It was at last the day of the year.
He went to a grave and pretended to be crying.
Seeing him, a woman came to him.
“What’s the matter with you?” said the woman.
“Hey, you are not a woman but a fox.
I can see your tail.
You can’t bewitch me.”
said he, laughing.
“Can you see my tail?
To tell the truth,
I tried to bewitch human beings many times.
But it is very difficult for me to hide my tail.
How can I hide my tail well?”
asked the fox.
“You have only to come to my home.
I’ll give you tablets to hide your tail.
But I tell you never to bring Sake and ‘Mochi’(Rice Cake) as a token of thanks.
Whenever I see them, I become almost sick to death.”
said he and returned home.
He hid two dogs, black and white, under the floor, waiting for the fox to come.
Soon the fox visited him.
“I’m the fox you met at the grave. I came to get the tablets.”
He opened the door and let the fox in.
“Would you give me tablets at once?”
“Black, White. Get out and come here.
You are foolish enough to be deceived easily.”
cried he, when two big dogs appeared.
The fox managed to run away in the mountain from the two barking dogs.
The fox was so angry and remembered what he said- he didn’t like Sake and Mochi.
The fox collected as many bottles of Sake and many Mochis as possible and threw them into his house.
The man and his wife were listening to the noise lying in the bed.
On the New year’s day, they found a mountain of Sakes and Mochis in the house.