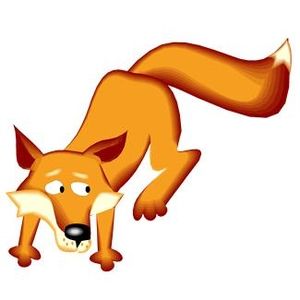 Long long ago, there lived a fox in a forest, and a bear in a mountain that was far from the fox’s den.
One day in fall the fox happened to see the bear for the first time.
The bear was so big that the fox was afraid of him at first.
She watched the bear carefully for a while to make out what type of animal the bear was.
And judged he wasn’t so fierce.
She gradually approached the bear to talk to him.
“Hello, Mr. Bear. You look great. I was wondering if you were interested in gardening,”said the fox.

“Hi, Ms fox. I like gardening,” the bear smiled and answered.
“Great! Then why don’t you do gardening with me?” the fox suggested.
“That sounds good,” the bear smiled again.
“Would you find a good place for our garden, Mr. Bear?
Then I’ll gather some seeds.
When I come back, I’ll cultivate and sow the seeds with you,”
said the fox, and went out to gather seeds.

The bear was so pleased that he started working in a good mood.
Before the fox came back, the bear pulled up some trees and bushes around him,
dug and dug the ground, and leveled it with his paws, and finally made a field big enough for their gardening.
When the fox returned with some seeds, and noticed what the bear had done, she cried with joy,
“What a nice field you’ve made!”
Then she started sowing, but soon she stopped to talk to the bear about something,
“A good idea has just occurred to me, Mr. Bear.
We’ll soon see the seeds sprout, come into leaves, and then bear lots of fruit.
Why don’t you eat all the fruit above the ground?
Then I’ll eat all that grow under the ground.”
As the bear liked eating fruit, he agreed with her at once.
A few months later, the bear saw lots of leaves growing.
Without doubt they were radishes.
No wonder he couldn’t see any fruit among them.
A promise is a promise.
The bear couldn’t eat any, but the fox ate all the radishes.
One day in spring, the taste of success encouraged the fox to visit the bear’s den in the mountain.
The fox thought that the bear was surely sitting inside.
She timidly looked into the den, and said,
“You were unlucky last year.
Why don’t we grow vegetables again?
Next time you can eat the nice things that grow under the ground, and I’ll eat any fruit that grows above ground.” 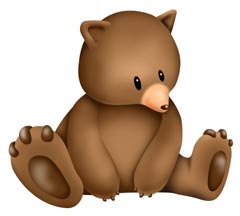 The bear agreed with the new contract.
Again the fox gathered some seeds, and the bear cultivated the field.
Then the fox sowed the seeds and the bear watered them every day.
A few months later what the bear saw in their vegetable garden were beautiful strawberries among the leaves.
But they were the fox’s shares.
He expected to get something good under the ground.
He dug and dug with his paws, but he couldn’t find any.
All his efforts were in vain again.
He was so angry this time that he decided not to listen to the unfair fox any more.
A few months later when the fox visited the bear’s den again, the bear pretended not to notice the fox coming.
In front of the bear’s den, the fox started speaking with a loud voice, like this,
“I’ve found a honeycomb.”
Honey was the bear’s favorite, so he secretly listened to her talking.
The fox continued, and the bear started listening to her very carefully.
“It’s in a bush, Mr. Bear.
The honeycomb is very big so someone will notice it before we get there.
Hurry up! Let’s go and get some honey.”

The bear felt very happy, and followed the fox with no doubt.
Soon they got to the bush and the honeycomb was there just as the fox had promised.
The fox politely said,
“Mr. Bear, I think you deserve to lick the best part of the honey first.
You can enjoy licking the honey as much as you like.
I can wait a while.”

The bear was so pleased that he reached his paw to the honeycomb, and was about to stick his tongue to the comb—, just then a swarm of honeybees started to fly around him.
The bear was stung all over his face.
“Ouch!” he cried as he ran away from the honeycomb as fast as he could.
Buzzing around, all the bees followed him.
Seeing that, the fox was licking her chops.
She took the honeycomb in her mouth, and ran back to her den in the forest as fast as she could.
This time the bear got so furious that he couldn’t put up with her behavior any longer.
One day, the bear was busy eating as much food as he could to prepare for hibernation for the coming winter.
Then the fox, which couldn’t find food any more, came to ask the bear for some food.
Looking at the poor fox, the bear felt sorry.
Then he remembered seeing a horse drinking water by the river.
“Go to the river, and you’ll find a horse drinking water.
I don’t think it’s as smart as you are.
Chances are that it will collapse if you bite it on its leg.
After that you can eat its meat or save some for this coming winter.”
The bear treated the fox kindly and he forgot all the bad memories he’d had.
The fox was able to trick the bear so easily, so she never thought that she would fail in tricking the horse.
When the fox found the horse by the river, she sneaked behind the horse and tried to bite its leg.
But just before the fox bit the horse, it noticed her and kicked her off into the air.
Before long the fox felt unconscious.
Next spring, when the bear came to the river to drink water, he found the fox lying there on the withered grass.