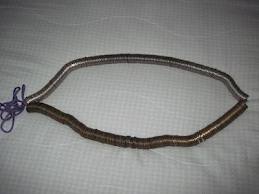 Long long ago, there was a very young disciple practicing asceticism(self-denying way of life) under an old priest in a rural temple.
As a matter of fact, the disciple was still a child.
When the priest sat in front of the principal image in the temple’s main hall, the kid-disciple also sat next to him mimicking the priest chanting sutras.
And when the priest went to houses where funerals were going to be held, the boy followed him and had funerals with him.
After funerals were over, they gave a small coin to the disciple to show their good will and gratitude.
The disciple was too young to know how to use the coin.
At first he just played with it;
he threw it high in the air, and caught it on his head.

At the second funeral, he got one more coin, and at the third funeral, another coin.
He then became interested in collecting them.
Each coin had a square hole.
He passed a string through the coins’hole to make a coin-ring.
He hung it on a hook of the main hall’s pillar.
Every time he got a new coin, he untied the string, and added it to the coin-ring.
It became his pleasure to make it larger.
People came every now and then to worship at the temple.
When they saw the disciple and his coin-ring, they felt an urge to tell him something.
One of them teased him, saying,
“You have a lot of money. Why don’t you buy us some dumplings with it?”

Another person warned him like this,
“You might have your coin-ring stolen, if you keep it hanging there.”

That warning really made him timid.
The boy didn’t want to lose his treasure.
Sleeping over that night, he hit on a good idea.
He put the coin-ring in a pot and buried it under the ground behind the temple bell.
“Nobody would notice where my coin-ring is,” he thought.
He was happy and relieved as he found the nice and safe place to keep it.
Whenever he got a new coin, he dug out the pot, added it to the coin-ring, and buried the pot again.
One evening, the disciple struck the evening-bell as usual.
Then he noticed that a big frog was sitting on the very place where he had buried his pot.
The frog glanced at him for a second, and then jumped off toward the woods behind the temple.
“That frog might be what my coin-ring transformed itself into.
If so, my treasure would be gone! What shall I do?”

One day the old priest happened to walk to the temple bell and heard the disciple murmuring.
The priest listened to him very carefully.
“Transform yourself into a frog and get away to the safe place if some bad guy happens to see you, but you don’t need to do that when I myself open the lid, understand?”

He felt odd.
After the disciple was gone, he stood where the child had sat and said something.
He soon noticed that a part of the ground was covered with new mud.
He dug the spot and easily found the disciple’s pot.
He understood what the boy was afraid of.
The priest was the kind of a person who liked making jokes.
An idea hitting on him, he put it into practice.
First he caught a big frog.
Then he took the coin-ring out of the pot, and put the frog into it instead.
The next day, the disciple got a coin at a funeral again.
Then the time he struck the evening bell came at the end of that day.
The priest secretly followed the disciple with much expectation.
After striking the bell, he dug the pot out, took off its lid, and—.
You know what he was to find in the pot.
He was astonished to see a big frog.
He hastily said to it,
“Hey, it’s me.
You don’t need to transform yourself!”

But the frog was a frog.
“It’s me. Don’t you hear me? You know, I’m not a thief or some bad guy,” he cried.
The frog glanced at the boy for a moment, then suddenly hopped out of the pot.
He tried to catch it, but failed.
Seeing the frog jumping away, he cried loudly,
“Come back to me. You don’t need to be panicked. I’m your—.”

The last word wasn’t clear because of his tearful voice.
The priest, who was watching what had been happening from the beginning, couldn’t help laughing, but he also felt a little pity for him.
He showed up in front of the disciple with the coin-ring in his hand, and gave it back to him.
Are you asking me what the priest told to the boy?
Well, maybe he apologized first, and then— oh, you can imagine what he said.