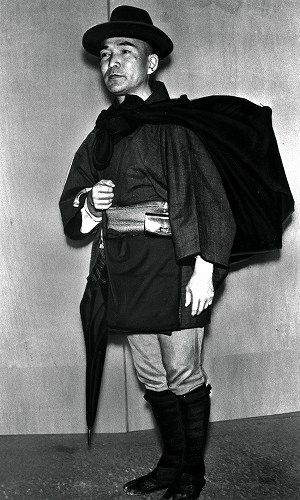 Long long ago, medicine peddlers would go traveling around from village to village, town to town in this country.
Even in the early Syowa era, those peddlers carrying a big medicine box on their back would go from house to house.
Some of them were good storytellers as they had tons of interesting experiences during their trips on the job.
This is a story told by one of those old itinerant medicine peddlers.

One day, an old man stayed at an old inn after finishing his daily business.
He was an itinerant peddler selling medicine from village to village, town to town.
The inn where he decided to stay that evening looked not only old but also shabby.
As it was the only inn around there, he had no other choice but to stay there.
Despite his tiredness, he couldn’t sleep well that night because he was bitten by fleas many times.
After he caught and squashed the tiny insects, he tried to sleep again.
But soon he felt itchy.
He found so many red spots all over his skin.
According to his schedule, he had to stay there another night three days from that day.
He wouldn’t want to sleep on a flea-ridden futon anymore.
Just thinking about that turned his stomach.

The following morning, he showed his captures to the wife of the inn owner, and said,
“Look at these fleas, Ma’am. I caught them all last night.”
She just cast a glance, and said,
“Oh, poor fleas.
They say that being bitten by lice causes the plague, but don’t worry.
These are just fleas.”
Her attitude was rather cool.

The man said to her in a low voice, as if he was about to reveal a secret,
“Maybe you don’t understand what I’m trying to say, but you are missing the chance to earn.
Back in my place, we can sell fleas at high price to the pharmacy which I’m working for.”
“I can’t believe that!
You are telling me that fleas can be good medicine?
Tell me what kind of disease fleas are effective against?”
she asked earnestly.

“They dry and powder fleas, then add some herbs to—.
Oops, I can’t tell you more.
It’s a secret.
But anyway it’s true.
You can sell them at a high price.
Listen, three days from now, I’ll come back here to stay another night.
I think you’ll have enough time to catch fleas.
If you’d like, I’ll take them to sell to the pharmacy at high price for you.”
Three days passed.
As he promised, he showed up in front of the wife of the inn owner.
After the long trip, he looked exhausted.
The woman showed him a bag with something like black grains in it, and said proudly,
“You see these fleas. I haven’t counted how many of them are in it.
I’m excited that you’ll sell them for me.”

“Oh, wonderful. Anyway after finishing dinner, I have to go to sleep as soon as possible.”
He rushed away to his room hardly speaking to her.
As you can imagine there was nothing that disturbed his sleep.
He had a good sleep because his futon was flea-free that night.
The next morning when he saw the woman, he said to her merrily,
“Oh, I forgot to tell you the most important thing.
When you sell fleas, you have to count the number of the fleas you caught.
You need lots of skewers.
Put twenty fleas on each skewer to count easily.
I’ll come back here someday in the near future.
Please prepare fleas on skewers by then. Good luck.”

He left the inn in a good mood.
That was the last time the wife of the inn owner saw the peddler.
He never visited the inn again.