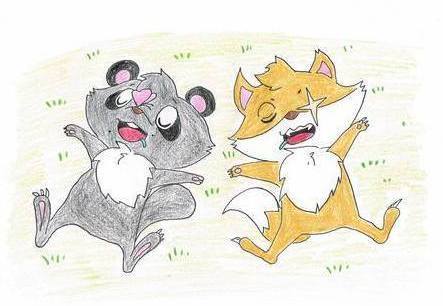 Long long ago, people believed that both foxes and raccoon dogs were animals that could change their shapes in order to bewitch innocent people.
But it’s not true.
They disguised themselves to have fun simply for themselves.

One day a fox was chatting with a raccoon dog.
Actually they were on good terms with each other at that time.
The fox said,
“I really admire your ability to change your shape.
I think you are better than I am.”

“Thank you, Fox.
I appreciate your compliment.
But I think you disguise yourself better than I do,”
said the raccoon dog modestly,
“I am sometimes so impressed by your wonderful disguises that I cry out in admiration.”

“Well, I’d like to know who is better, you or me.
Why don’t we have a competition?”
said the fox.

A brilliant idea flashed into the fox’s mind.
He knew that his friend sometimes had lunch in front of a Jizo.
(A stone Buddhist statue, which is said to be a protector of children and travelers.)

It was time for lunch.
The raccoon dog appeared with some rice balls wrapped by a big leaf.
He stopped in front of the Jizo as usual.
He sat down, and offered one of the rice balls to the statue, and then prayed with his head down, closed his eyes and placed his hands together.
Maybe he was praying that he could think of a good idea to overcome the fox.

After a while, he raised his head and opened his eyes, and then he noticed that the rice ball he’d offered had disappeared.
“Good heavens!
I put a rice ball down right here.
But it’s gone.
Where is it?”

He looked for it around the statue in case it’d rolled down.

“All right.
I have enough rice balls here.
Why don’t I offer another one?”
He placed another one and prayed again.
After a second he opened his eyes.
The rice ball wasn’t there again.
“How strange!
It’s gone again,”
he said.

He put one more rice ball.
He prayed again.
But this time he kept his eyes half open.
The statue was smiling, reaching its arm to the rice ball, having it, and then started eating it!

“Oh, my gosh, it’s you, Fox.
You ate my rice balls.
Well done!
You completely tricked me.
Nobody could do better than you,”
he said.

“See what I did?
Now it’s your turn to show me something,”
the fox said in a good mood.

After thinking a while, the raccoon dog said,
“You can see a parade of the feudal lord here around noon tomorrow.
So watch it very carefully.”

“Here comes the parade of the lord.
I should take a careful look at it to see the raccoon dog’s disguise.”
The fox was waiting for it with a great expectation.

He saw the party of the lord coming nearer and nearer.
The men with flags came at the top of the parade, followed by lots of samurai and some women.
In the middle of the line, he saw two palanquin bearers carrying a gorgeous one with a long pole on their shoulders.
“It looks like a real parade.
I didn’t expect to see such a perfect one!”
he growled.

The fox was so impressed he jumped out in front of the palanquin.
He wanted to congratulate the raccoon dog right away.
“You are the winner, my friend.
Your parade is perfect!”
But he couldn’t finish his line.

“What is it? Oh, it’s a fox.”
“A fox is here. Catch it.”
Some samurais around the palanquin rushed to the fox to catch it.
“It’s me, Raccoon Dog.
Don’t panic.
You’ve already beaten me.”
But no one understood his language.
It was only natural because the landlord parade was nothing but a real one.