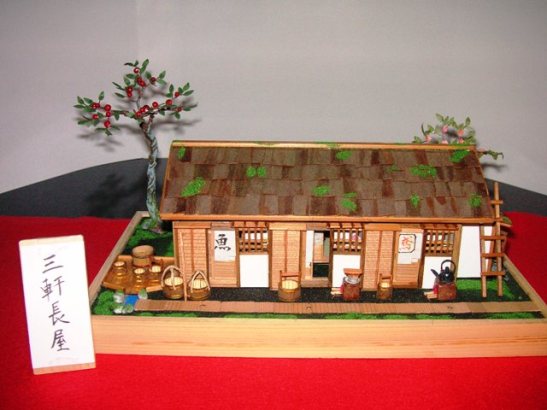 In the Edo era, there lived three good-natured but slightly foolish men.
They lived in a house divided into three units.
Their names were Pine (Sho), Bamboo (Chiku) and Apricot (Bai).
Japanese people believe those three trees(Shoh-Chiku-Bai) bring good fortune.
Close by there was a shop called ‘Iseya’.
The shop owner was called the Millionaire because he was so rich.

“That’s meaningless. You have to say ‘What kind of man has he become?’
Get it? Last line is for you, Apricot.
Short but the most important line.
‘#He has become a rich man.’
Then the three of you say in unison,
‘Congratulations.’
That will be a nice performance for the wedding ceremony.
Well, how about practicing it from the beginning?”
“Let’s get started.
I’m the first one to speak,
‘#The millionaire’s son-in-law has become such a man.’
You’re next, Bamboo.”

“#He’s become a rich man.”
“Don’t be stupid. You took Apricot’s line.
Look, he opened his mouth to speak but lost his chance to say anything.
Oh, poor guy!
Try it again, guys.”
the old man said.
They started again.
“#The millionaire’s son-in-law has become such a man.’”
“#What kind of man has he become?”
“#He has become a pitch man.”
“A pitch man?
You mean you want him to be like a poor merchant?
That’s not suitable for the lucky day.
Try not to use such a word,”
the old man said.
“We don’t have much time left.
Let’s practice it on our way.
Thank you very much for giving us a good idea.
We appreciate it a lot,” said Pine.
The trio headed to the place where the wedding reception was to be held.
Everyone celebrated the newly weds by singing, dancing and making speeches during the feast.
Now Pine, Bamboo, and Apricot’s turn came.
Pine was the first man to speak,
“We are Pine, Bamboo and Apricot.
Listen everyone,
#The millionaire’s son-in-law has become such a man,”
Pine successfully spoke,
“Now your turn, Bamboo. ”
“All right,” Bamboo followed him,
“#What kind of man has he become? Your turn, Apricot,”
But Apricot was very nervous and had forgotten his line,
“Yes, um— Well, um— oh, my gosh! I don’t remember. Umm—
#He has become a— become a— dead man!”
Oh, no. What an awful word to say!