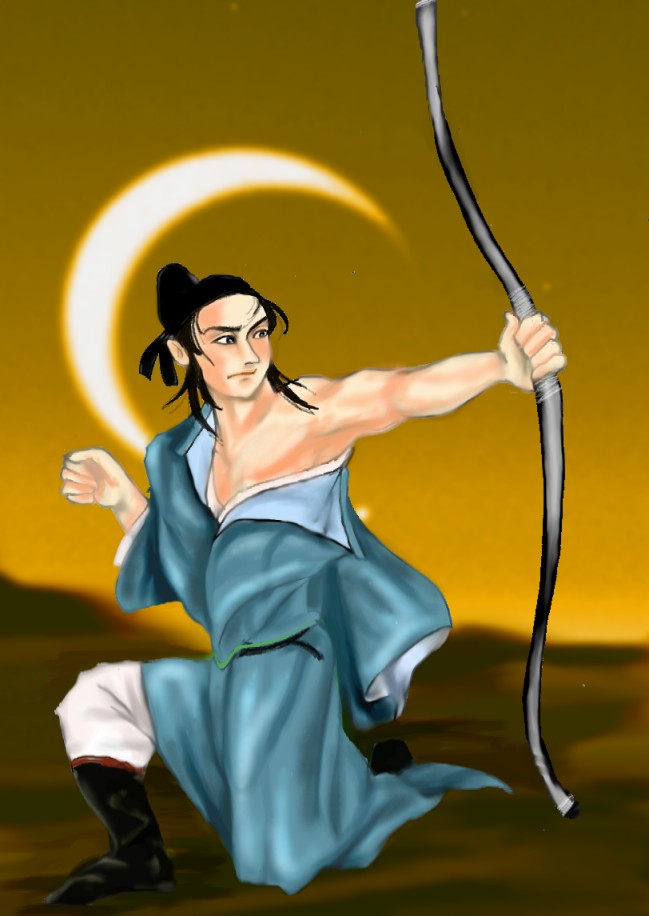 Long long ago, there lived a strong and brave warrior called ‘Yuriwaka.’
He was a big man of strength.
Everyone around him knew he was a great archer.
His favorite bow was a 3-meter iron one.
It was so heavy no one could even lift it.
But he could handle it as if it had been nothing.
Later he became a provincial governor of Bungo (now in Oita Prefecture), Kyusyu.
His wife, Kasuga-hime was a beautiful and gentle lady.
So he lived happily with his wife.
One day, they found thousands of warships from the Korea Peninsula sailing toward Kyusyu.
Yuriwaka left home with one thousand warriors and a fleet of ships to fight them.
When his wife saw him off, she said to him,
“Be careful, please. You shouldn’t let down your guard until the time you come home safely.”

The battle started off the coast of Tsushima Island, one of the islands of northern sea of Kyusyu.
Yuriwaka, who was standing on the bow of his ship, used his 3-meter iron bow with hundreds of arrows.
He never missed his targets.
His men also fought bravely.
But the enemy’s ships outnumbered his.
However times he shot, the new target appeared one after another.
It seemed like the fight wouldn’t have finished.
But one of his arrows shot the enemy’s leader’s head.
Their boats soon turned back and sailed away.
When he saw them sailing away, he was confident that the battle had finished with his great success.
But he knew lots of his men had been killed or injured during the battle, and he himself was exhausted.
He decided to drop by the nearest island and took a rest for a while.
He told Beppu Brothers, his chief retainers, to find a place to have a rest.
Then the ships reached the Genkai Island that was a deserted island and still far from Kyusyu.
As soon as Yuriwaka landed, he took off his armor and helmet, and fell asleep.
In fact he had been fast asleep for three days without waking a single moment.
When he woke up, he felt something strange.
It was so quiet.
The sun had been already risen high above him.
He called to his men in a loud voice,
“Somebody, come quickly!”
Nobody answered.
He looked around.
His armor, helmet and the iron bow were gone.
Soon he realized that it was Beppu Brother’s rebellion.
They had abandoned him on the deserted island.