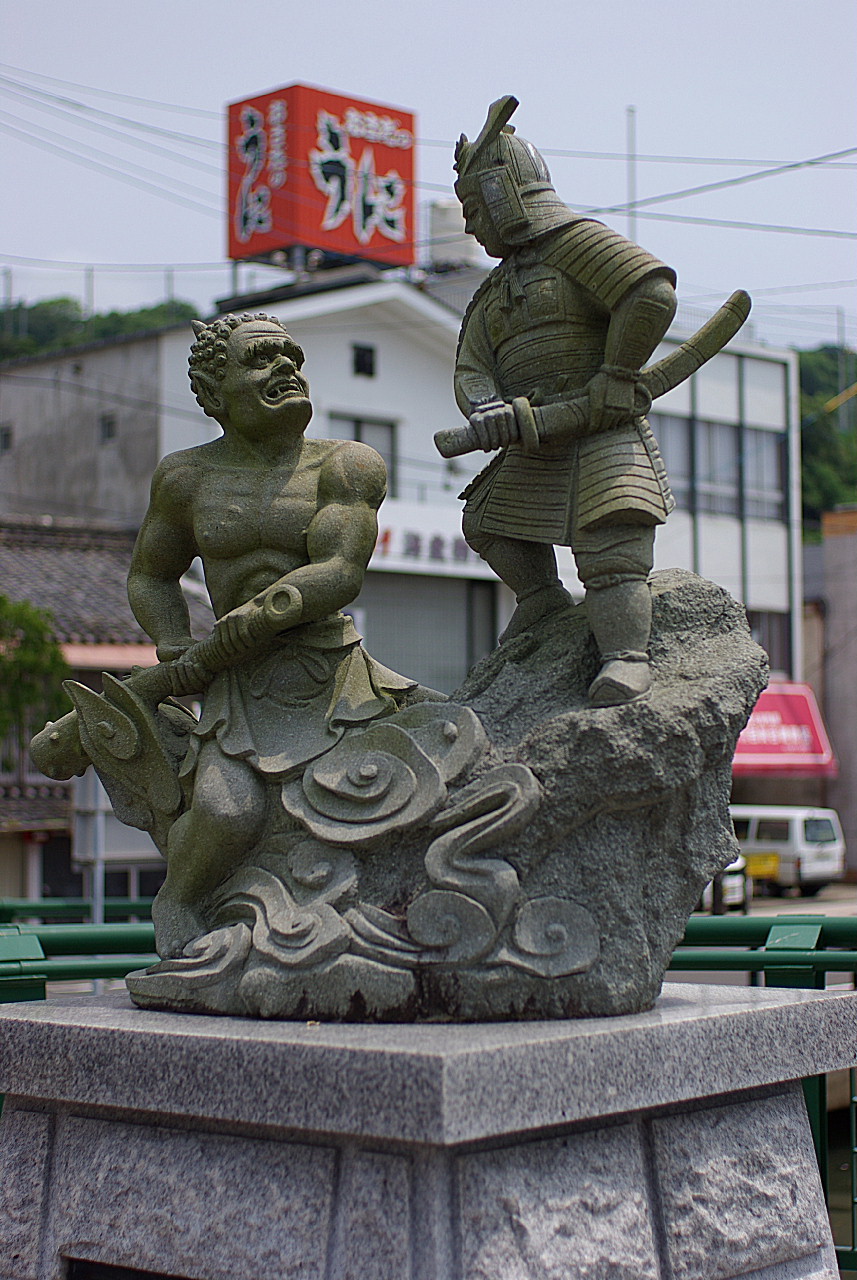 One day a fisherman fishing in the offing spotted something moving on the island.
He strained his eyes and listened carefully.
It looked like a man crying something and waving his hands.
That was Yuriwaka, of course.
The fisherman soon rowed his boat toward the island.
He was very surprised when he saw the creature at first.
It had a bushy bearded face, long hair, dirty hands and legs, and scarcely wore clothes.
It looked like an ogre that could speak man’s language.

“I was one of Yuriwaka’s men.
After he defeated the navy from the Korean Peninsula two years ago, he and his men stopped by on this island and rested for a while.
I failed to ride back on the boat and have been isolated from everyone.
You are the first man I’ve met since then.
I’d greatly appreciate it if you could take me to Kyusyu with you.”

Yuriwaka didn’t tell the fisherman who he was because he was afraid the fisherman might be under the Beppu Brothers.
The fisherman felt pity.
He came back with Yuriwaka and named him Kokemaru (Moss man) since his face and body was covered with hair like moss.
He treated him as his servant.
Soon he noticed that Kokemaru was clever and had tremendous power.
He said to him now and then about the Beppu Brothers and Kasuga-hime,
“Listen. The brothers have taken over Yuriwaka’s position and have been ruling the nation with a high hand.
They’ve imposed heavy taxes on us and forced us to work for them.
They had a big house built like a palace.
Thus they are living in luxury.
Mean while, people have been enduring lives of the hardship.
The power had gone to their heads, especially the older brother.
He wanted to marry Kasuga-hime.
Poor Kasuga-hime!
She loved Yuriwaka very much.
She ended up throwing herself into the pond of Makomo.”

Kokemaru thought his heart would break when he heard of his wife’s death.
But he still didn’t tell the fisherman that he himself was Yuriwaka.
He visited his old house secretly.
As he expected, he didn’t meet anyone there.
He couldn’t help thinking of his wife and the life with her years ago.

Some days later, The fisherman told Kokemaru about the ceremony and event that would be held at the Beppu Brothers’ place on New Year’s day.

“After a banquet, they’ll have a competition of horseback archery.
Do you want to watch it with me? If you want, I’ll take you to the place.”
“Can I enter their place?” he asked.

“You can, but only outside of their house for the New Year’s event.
They permit anyone to watch the horseback archery.”
the fisherman answered.
People gathered around the riding ground.
Urging horses, a man shot two arrows.
But both shots missed the mark.
The next man tried, and the third man.
They also missed the shot.
Then a big laughter echoed around the field.
It was Kokemaru!
Nobody knew who he was because his appearance was greatly different from what he had been.

“Who is he?”
Everybody thought.
Some men came to the man who laughed loudly, and took him in front of the Brothers.
“What a daring fellow you are, laughing at our men missing the shot!
Try it yourself.
If you miss, you shall die!”
The older brother yelled at him.
The younger one threw a bow and two arrows.
A horse was prepared for him.
“I can’t,”
the daring fellow said,
“I can’t make it with such a weak bow and arrow.
Those are for children, aren’t they?”
He grabbed the bow and arrows, and broke them.

“None of your impudence!”
The Brothers’faces turned red with rage.
“Bring the iron bow and arrows for him,”
the younger brother cried to the followers near him.
Soon two men carried a big bow and another two men an arrow each.
They looked very heavy.
Kokemaru, however, carried them easily under his arm, and mounted the horse.
Then he shouted,
“Listen, everybody.
Who do you think I am?
I am none other than Yuriwaka, your real master.
The Beppu brothers abandoned me on the island two years ago, and—.”

No sooner did the Brothers hear this announcement than they turned their horses’ heads and laid whip to them.
They started running very fast.
Yuriwaka took aim at the target and released the arrow one by one.
A woman came trotting to him from the distance.
He recognized her as Kasuga-hime at a glance.
“Kasuga—” surprised he ran to Kasuga-hime.
He wanted to show her how delighted he was to see her again.
The cry he made, however, was like a beast’s roar.
The two ran to each other and held each other’s hands.
How happy they were to reunite at their old house!
He told her about the life on the island briefly.
She also told him that she had to get through a hard time, and how outrageous the Beppu Brothers treated her.

She said,
“The older Beppu Brother wanted to marry me.
As I refused his proposal, he raged at me and told one of his men to kill me.
I was close to death at that time.”
“Yeah, I heard about that story,”
Yuriwaka said,
“Someone told me you’d thrown yourself to death.
It gave me a shock.
I was determined to destroy them in my mind, and watched for a chance to do it.
I finally killed the wicked men today.
Then you appeared in front of me.
I couldn’t believe it.
But it wasn’t a dream!”
Yuriwaka said.
“Listen, my love.
I have to tell you more about how I escaped from their wicked hands.
The man who was ordered to kill me had been one of your men for years.
He believed that you had passed away on the island because of a poisoned arrow you’ve got during the sea battle as he’d been told.
Since then he has served the Beppu Brothers.
But the loyal man didn’t forget you or me.
He couldn’t kill me.
He thought that if he did that, he would be tortured by remorse for his crime for the rest of his life.
But if he didn’t obey his cruel master’s order, they would punish him, and some other man would get the order to kill me.
He had a daughter who was the same age as me, and she looked very similar to me.
He told his daughter about me.
After the young woman heard her father’s agony, she vowed to offer her life in order to save her father and me.”
When her story reached this point, her eyes were filled with tears, and she couldn’t continue for a moment.

Yuriwaka was deeply moved.
Soon after that he had a shrine built for the poor young woman.