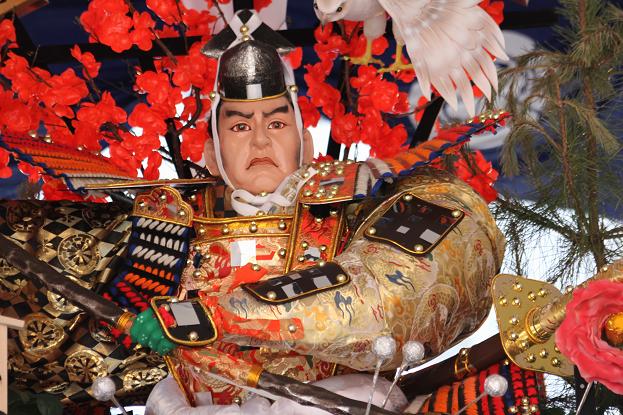 Yuriwaka barely managed to survive alone catching fish, and gathering seaweed and wild fruit.
Every morning he stood up on the seashore of the island and shouted his wife’s name to the sea,
“I’ll return home without fail, Kasuga-hime. Please wait for me a little longer.”

In the mean time, the Beppu Brothers, who’d been Yuriwaka’s chief retainers, of all things, had abandoned their master on the deserted island and returned home with his men in victory.
They visited Kasuga-hime with her husband’s armor and helmet, and told her a pack of lies.
The elder brother said,
“You may not believe this.
But we must tell you the saddest news.
Your husband, our master, was shot by the enemy’s leader and fell into the sea.
Can you forgive us that we couldn’t save him?”
he made his face look very sad and shed false tears.

“This is his armor and helmet.
Please keep them as his remembrance,”
the younger brother handed them to her.

Soon they each became a new provincial governor and a sub-governor successfully.
It had been their desire for years to take the place of Yuriwaka.
They gloated over their success.
Kasuga-hime, however, didn’t believe her husband had died.
She had been taking care of 32 hawks and 12 dogs that her husband had loved very much.
She thought that if she would keep them, he would be happy.
She wanted to see her husband’s happy face when he found them safe and sound.
She waited for him day after day.
She wanted a little bird to tell her his news, but no one told her about him.
She gradually lost her appetite, and became thinner and thinner with grief.

Two years had passed and she heard no news.
She finally decided to release his hawks and dogs.
Soon all the dogs ran away, and the hawks flew up high in the sky.
But Midorimaru, one of his hawks, was still in the cage.
She fed it some food, but it didn’t eat.
She gave it a rice ball.
It took it with its beak and flew away.
Meanwhile, Yuriwaka also became thin and lean.
His appearance had changed so much that nobody would recognize him if anyone had come to see him.
All he could eat was a bit of fish and seaweed.
That turned him to skin and bones.
His clothes were ragged, hair was messy, and his beard had grown long.

One day he saw something flying toward him.
Then it landed on his shoulder.
It was Midorimaru with a rice ball!
What a bird!
It found its master.
“Oh, it’s you, Midorimaru.
You’ve recognized me, haven’t you?
I wish you could speak, and tell her about me!
If you could tell her I’m still alive— Wait a minute.
There must be something I can do.”

He looked for something to write on, then picked up a leaf, cut his finger with a knife, and wrote ‘YURIWAKA’ on it with his blood.
He tied it to its leg and let it fly.
Three days later, the bird flew back to its cage.
Kasuga-hime found it and said,
“I gave you freedom, didn’t I?
Why have you flown back here? ”
Although she felt happy when she found the hawk again.
Soon she noticed something attached its leg.
“Oh, a leaf—there’s something written on it—with blood. —’YURIWAKA’ It says ‘YURIWAKA.’
It must be my husband’s handwriting!
He is still alive!”

She cried with joy.
But she didn’t tell anyone about it.
She wrote a letter to him and tied it to the bird’s leg again.
And she let it fly.
The flight to and from the island was a hard journey for the bird.
Moreover it started flying to the island again without a rest.
Poor Midorimaru!
It flew until there was no strength left and then flew down and down— to death— and floated above the waves.