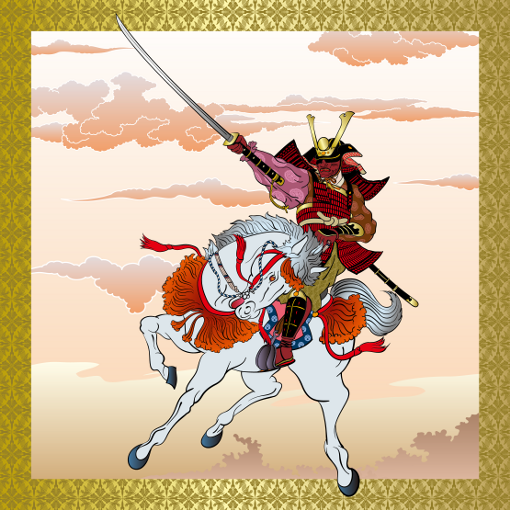 If you visit somewhere in Gunma Prefecture, you’ll probably hear about the monument called “Tagohi”, which stands at Yoshii-Cho in Takasaki-city, a small town in Gunma.
It is actually one of the three oldest monuments in Japan.
The Chinese characters, which were carved on the surface of it, will tell you the origin of Tago-Gun.
You can find ‘羊’ among those characters.
They say ‘羊’is the name of the man who was ordered to govern Tago-Gun as ‘Gunji’, a governor of Gun, by the Imperial Court in the early 8th century.
This legend is about ‘Lord Sheep,’ a governor of that region.

It is said he was born at the time of the sheep and the day of the sheep (according to the old calendar in Japan.)
So he was named Sheep.
Soon he became a tall and talented young man.
As he was ordered to govern Tago-Gun in 711, he had to visit the Court in Yamato (now it’s Nara Prefecture) periodically.
He had a fleet horse and a faithful retainer called ‘Kohagi.’
The horse and Kohagi could run much faster than any other horses.
Therefore they had no difficulty getting there in a day, and returning home in another day.
Sheep was so talented and worked loyally for the Emperor that he had been greatly trusted, and as he governed the region in a heartfelt way, people called him ‘our Lord Sheep.’

One day, on their way to the Court they took a rest as usual.
Kohagi told his master not to look at him sleeping, and disappeared somewhere.
Sheep was curious, so he sneaked around to look for his retainer, and found him taking a nap in the shade of a big tree.
He glanced at him lying on the ground from head to toe, however, he didn’t find anything strange.
He was relieved, but again he looked at him carefully.
Then he noticed a few feathers under Kohagi’s armpits.
“What are these?”
Out of curiosity he pulled them one by one.
He did it just for fun, and never thought that would cause his bad fortune.
Soon Kohagi woke up and noticed what his master had done.
He was shocked and felt sad.
He said to his master,
“The feathers you pulled out were my Genius.
They had enabled me to run as fast as the horse.
Without the feathers, I can’t run fast.
Not only myself but also the horse can’t run fast anymore.
I hope nothing bad will happen to us in the near future.”
As Kohagi said, he and the horse couldn’t run fast and take Sheep to the Court so often.
But Sheep never thought that caused him any trouble.
Perhaps some people in the Court envied his talent, and they spread a rumor that Sheep was turning into a traitor of the Court and preparing an attack against it.
Soon a large force was sent toward Tago-Gun by the Imperial Court.
He realized that things were getting more serious than he thought.
But fighting was the last thing he wanted to do.
So he visited the place where the Imperial Court force lodged to show his loyalty and avoid the fight.
Sheep said to the leader of the Imperial force,
As you know I’ve been a faithful and loyal man.
I have no intention to rebel against the Court.
People in this region are all kind and peaceful.
They work hard, but hate to fight.
I’m afraid the battle against you will diminish my strength as the governor.
Those are the reasons I don’t want to fight.
Will you go back and tell the Emperor about it?”

The leader listened to him, and said,
“I understand all that you are telling me.
I admit you are as faithful as you were.
But The Emperor ordered me to destroy you.
What’s done is done.
I can’t disobey his order.
Let’s fight bravely with each other until one of us honorably dies.”

Sheep couldn’t find a way to break the deadlock, but to prepare for death.
At last he said decisively,
“I’ve made up my mind.
I’ll fight against you with all my force.
But if you survive and go back to the Court, will you tell the Emperor that I’ve never done anything wrong in my life.
Promise me, will you?”

The battle between them had started.
The Court troop had a great number of soldiers, while Sheep side had about one hundred.
In the end, Sheep’s soldiers and families were driven into the castle.
He said to his men,
“Take women and children out of this castle first.
I want them to survive.
It’s no time to feel sad.
Hurry up!
I regret to say it is impossible to find a way to win this battle anymore.
We are all ready to risk our lives. Go!”

During the hard battle, all of his soldiers lost their lives except for Sheep and Kohagi.
Kohagi said to the master,
“Lord Sheep, our Great Leader, we are the only people who’ve survived here.”
“I see. It’s about time we also left here,”
said Sheep gravely.
As soon as he spoke these words, his armor and helmet broke off by themselves, and his figure started changing:
the head and body became covered with feathers,
the hands turned into wings,
the legs became very thin,
the feet had sharp nails,
and he had a beaked mouth.

Exactly the same thing was happening to Kohagi too.
They stared at each other for a moment, cried sharply, flapped their wings together, and flew away.
People in Tago-gun told each other that they saw two kites flying toward the mountain that afternoon.
(‘Kite’ is a bird’s name, ‘Tobi’ in Japanese.)

Later, people built a monument for him.
They’ve worshipped the monument and called it the ‘God Sheep.’