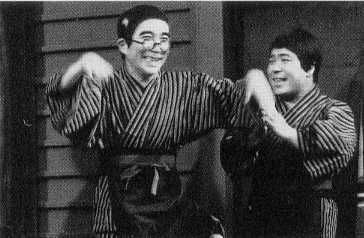 Long long ago, there was a millionaire in a village.
He had many of men working for him.
One of the young men among them was quiet and worked honestly.
He worked slowly but steadily in everything he did.
He put his heart into any work he was told to.
He never made a face to anyone who made him work.

One day the millionaire’s daughter told him to catch a cicada on the tree.
He climbed the tree to catch it, but before his hand reached it, it flew away.
His fellow workers noticed it and made fun of him,
“You are a real fool!
No one does such work honestly!
Don’t you know that ‘Honesty does not often pay.’?”

On the last day of the year, young apprentices were sent on a last errand to pay and collect bills.
Most of them returned to the master’s earlier than usual because they had visited only a few houses near by.
They told the young man to go around the rest of the houses.
The young man did his work thoroughly.
He visited all the houses he was supposed to visit.
He came back late that night.
His colleagues had already taken a bath, relaxed in their rooms, and were waiting for dinner.

When they were having dinner in the kitchen that night, the millionaire, who had already had dinner with his family in their own room, came in and said to them,
“Someone, go to town and buy some sake for me at once.”

Nobody answered but the young man.
He stopped eating, and said,
“Yes, sir. I’ll go.”

He hurried to the liquor shop in town.
One hour later he came back.
The rest of his colleagues had already gone to bed, but the master had been waiting for him.
The young man handed the sake flask to his master, then ate the leftover of his meal in the kitchen, and took a last bath.
When he finished bathing, he noticed that his clothes were gone.
He tried to find them.
But what he found was a new set of clothes there.
He was confused.
Then millionaire came over and said to him.
“I prepared those new clothes for you. Put them on.”
“Thank you, sir. But why must I wear these nice clothes for work?”
the young man said,
“I have to work hard. The old ones are better, I think.”
Smiling, the millionaire said,
“I have a daughter but no son to turned my property over to. So I want you to be my son-in-law.”
The following morning, the master told all his men to gather in his room.
He said to them,
“Listen to me carefully.
This young man will be my successor.
You must listen to him and obey him from now on.”
The hard worker married the millionaire’s daughter, and succeeded his property.
He was called the Millionaire’s son-in-law, but he didn’t care what people called him.
As he kept working as hard as ever, his property became bigger than before.
Soon people called him the Young Millionaire.