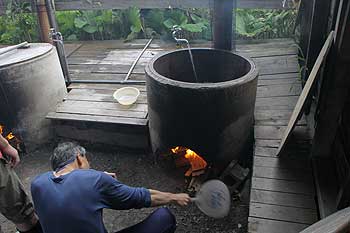 Long long ago, there lived a woman and her two sons in a village.
The woman always said,
“Because he is so stupid, my second son’s future is a big worry to me.”
Every time she told the boy to do something, he always said,

“All right. It’s easy,” or “Count on me.”
But he never did anything right.
His mother had to do the things all over again.
But the boy behaved as if nothing had happened.
The boy’s brother called him ‘Guzu’(dawdler) and so did the villagers.

One day the woman caught a cold.
Neither herself nor her two sons thought it was serious.
But a few days later the illness took her life.
The brothers talked about the funeral they were going to hold for their mother.
The elder brother said to the boy,
“Guzu, go to the temple and ask a priest to come to our house for our mother’s funeral.
You’ve never met priests, have you?
Ask the one in a black robe.
Do you understand?”

“Yes, I do. Count on me,” the boy answered.
He went to the temple and found a crow on the grounds.
“Oh, he wears a black robe.”
He bowed to the crow and said,
“My mother died. So please come with me.”
“Caw, Caw,”
the crow cried and flew away.
He reluctantly returned home, and told his brother that the priest in a black robe flew away.
His brother said,
“It wasn’t a priest but a crow.
Try asking a priest wearing a white robe and on top of that, a red robe.
You can’t miss him.
Go and come back home with him at once.”
The boy hurried to the temple again and found a rooster with a red cockscomb.

“White and red.
He must be the priest my brother described,”
he thought, and knelt down with his hands on the ground and said,
“My mother died. So please come to my house quickly.”
“Cock-a-doodle-doo,” the bird cried.

“What? You said you’re a cook? But I need a priest.”
The bird, of course, didn’t understand what he said, and ran away.
He couldn’t bring a priest again, and dejectedly returned home.
His stupid excuses disgusted his brother.
He said,
“How stupid you are!
I’ll go there myself and ask the priest to come.
You stay home instead, and cook rice.
Do you understand?”
“Yes, I do. It’s easy,” he answered.
Soon the rice was coming to a boil in an iron pot, foaming bubbles, and began to make sounds,
“Guzu, Guzu.”
He thought his nickname was being called continuously.
So he asked the pot,
“What do you want?”
But the pot didn’t answer of course, and kept on making the same sounds.
He said to the pot angrily,
“Damn you! Don’t make a fool of me!”
But the pot still kept calling “Guzu, Guzu.”
That made him very angry.
He threw the rice pot down on the earth floor.
The rice scattered everywhere.
His brother, who brought the priest with him, found the boy in the kitchen, and knew what had happened.
He was so amazed at it, and said,
“Look, now we have nothing to serve the priest or any visitors.
We’ll have to cook amazake.
(Sweet low-alcohol drink made from fermented rice or sake lees)
You are stupid, but I know you are a man with strength.
Help me bring the pot down from the second floor.”
“All right. Count on me,” he answered.
The boy stood still at the first-floor side of the stairs while his brother went up to the second floor.
Soon he carried the earthen pot full of amazake to the stairs and tried to hand it to the boy who was waiting for him at the edge of the stairs.
His brother said to him,
“Hold the bottom tightly.”
“All right. It’s easy,”
he said and held his bottom tightly.
As soon as his brother let the pot go, it fell down on the floor in pieces.
Of course, all the amazake flowed over the floor.
“Stupid! I told you to hold the bottom,” he said angrily.
“Look at me. I am holding my bottom tightly.”
His brother was again disgusted with his brother’s foolishness.
“There is absolutely nothing to serve the priest.
The only thing we can do for the priest —,”
the elder brother thought is ” let him take a bath.”
When the priest was having a bath, the elder brother told the boy to go and ask him how the bath was.
He asked the priest in the bath,
“How do you find the bath?”
“It’s not warm enough. Please put the things around you into the fire, will you?”
said the priest.
He put everything around him into the fire, including the priest’s robe without hesitating.
“It is a wonderful bath,”
the priest was satisfied.
But when he got out of the bath, he found that there were no clothes to put on.
The boy’s brother had to apologize to him deeply for their rudeness.