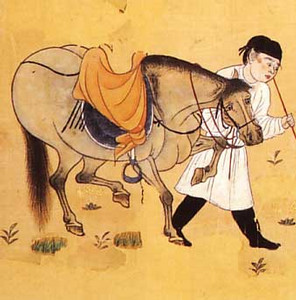 Long long ago, there lived an old man with his son in a village near the border.
He kept a red horse.
It was gentle, clever and strong.
It could carry heavy loads on its back and also pull a large carriage.
People in the village always spoke highly of it.
“What a wonderful horse the old man has!”
They not only admired the horse but also rented it to help with their work.
One day, when the old man went to the stable to let the horse out, he found something wrong.
Usually he heard the horse neigh when he approached the stable.
But it was very quiet in there.
“The horse is gone!”
The news soon spread all through the village.
His friends and neighbors came and said together,
“We are so sorry about your missing horse.
It was such a good horse.
You must be disappointed.
Maybe it is wandering around in the forest.
We’ll help you find it.
If it’s not, it must have been stolen by someone who heard of your horse’s power.
In that case you should report it to the official.”

The old man said calmly,
“Don’t worry about it.
You never know if it will bring me good fortune.”

People who tried to encourage him were offended, as he didn’t accept their good will.

A few days later, the old man thought he heard horses’ neighs from the forest.
So he went into it.
To his surprise, his missing horse was there along with other horses, wild horses!
They must have followed the old man’s horse.
What’s more, they all had fine coats.
“One, two, three…”
The old man counted to eleven.
But he didn’t bring any of them back to his place.
Instead, he tied each of them to a tree.
Soon everyone in the village talked with each other about the old man’s horses.
They visited him and said,
“It’s unbelievable!
How lucky you are!
Now you must be the richest man in the village.”

The old man said to them in a cool voice,
“It’s very kind of you to say so.
But I don’t think they’ll bring me happiness.
On the contrary, I’m afraid something bad could happen to me in the near future.”

The old man gave a warning to his son,
“Those wild horses are dangerous.
They haven’t had an experience letting people on their back.
We have to tame them first.
You can ride my horse, but you must never try them.

But the young man’s curiosity about wild horses grew stronger and stronger.
One day, driven by an irresistible desire, he rode one of them,

“Whoa!”
He cried.
No sooner had he laid whip to his horse, than it threw him.
The horse neighed loudly, reared up and ran away.
The young man was left with a broken leg.
Soon after that, the villagers knew about the accident.
They said,
“It was terrible!
No one expected that accident.
We feel really sorry for your son.”

The old man was very cool and said,
“It’s very kind of you to say so.
But I’ve never worried about my son.
You never know it could bring him good fortune.”
A few weeks later, a war broke out between their liege lord and the neighboring country.
They pressed all the young men in the village into the war.
But the old man’s son was spared,

“Oh, oh, you are handicapped.
All right, you can go back.”

It was a fierce battle.
To their great sorrow, most of the young men from the village were killed during the war.
The villagers talked about the old man with each other like this,
“How lucky the old man is!
It won’t be long before his son will recover and be able to work again.”

They believed the old man had a mysterious power to foresee the future.