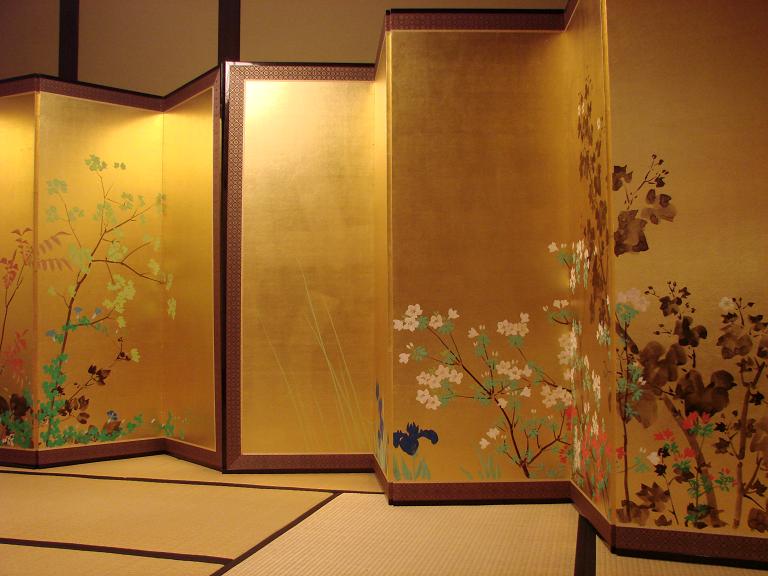 Long long ago, there lived an old priest who kept an old temple in a small village.
One day a typhoon hit the area, and its strong winds destroyed many houses in and around the village.
The old temple was also damaged;
especially a wall of the inner hall-a big piece of plaster had fallen and scattered all over the floor causing a large hole in the wall.
The old priest had made it a rule to hold a Buddhist service in the inner hall of the temple every Sunday for the people.
He thought it would be difficult to have the damaged wall repaired by the next Sunday-service.
So he decided to get something to hide the hole temporarily.

He went to a shop where they carried many antiques, big and small.
When he stepped into the shop, he was dazzled by a folding screen as the evening sun streamed into the room.
The old folding screen was covered with gold leaf, although some pieces were peeled off, it still kept its beauty.
The gorgeous folding screen caught his attention.
The shop owner complained that no customer had been interested in it because it was too big in any house and that if the priest wanted it, he could have it at a discount.
The priest measured the size of the folding screen with his eye and figured out that it was big enough to hide the wall’s hole.
He paid for it and asked the shop owner to carry it to the temple.

When he returned to the temple, he saw an old woman in shabby clothes standing at the front gate.
She was a stranger to him.
Her face was pale and covered with wrinkles but somehow she was an elegant woman.
From her looks, he could easily imagine that she once had lived in high society but maybe she’d had long years of hardship.
The woman came up to the priest, and asked him if she could stay in the temple for a while because her house had been destroyed by the typhoon and she had no one to turn to.
The priest felt sorry for her and let her into the temple.
He told her that she could stay there as long as she wanted.

The following day, the folding screen he ordered was carried into the inner hall.
He set it up just in front of the damaged wall.
He looked at it for a while and felt satisfied.
The old woman, who followed him, also took a look at it.
Her eyes were wide open and then filled with tears in an instant.

“What’s the matter?” the priest asked.

“Oh, it just reminds of something special.
This folding screen looks very old…somehow it reminds me of my old days.
As a matter of fact, I owned a very similar one that my husband gave me as a memento of our wedding.
Long years have passed since then.
Of course mine was more beautiful than this one.
I wrote down the date on the back of my screen.”
So saying, she stepped around to the back of it.
There she found the date she wrote on it!
“Here it is! It must be mine!”
she exclaimed,
“I was once a rich merchant’s wife.
But when the powerful earthquake occurred around this area about 40 years ago, I happened to go to a nearby town.
The shock was so big that I lost my memory for a while.
I didn’t know who I was, or where I was either.
When my memory returned, I noticed I’ve lost everything; all of my family and all of my possessions.
The priest was surprised and asked,

“Do you want to get this screen back?”
“No, I don’t.
Although it is a symbol of my husband’s love to me and the memory of the wonderful time we spent together, I can’t keep it.
I don’t have a house for it any more.
Here in the temple must be the suitable place for the screen,”
she said.
Next Sunday evening, a service was held at the inner hall of the temple.
It was filled with people.

The priest noticed that an elderly man was casting glances at the screen now and then during the service.
He had been living in the village for nearly 40 years.
After the service, the priest said to the old man,
“I assume you have a special interest in that folding screen.
“Yes, indeed.
I used to be a merchant and lived with my beloved wife.
But when we had the dreadful earthquake about 40 years ago, I lost my whole family.
I’ve wished they were still alive somewhere in this area.
Since then I have looked for them.
But my efforts weren’t rewarded.
I’ve almost given up,”
he said with a tearful voice,
“But…this must be the very same folding screen I gave to my wife.
If so it should have the date on the back of it my wife wrote!
“You are right.
It has the date on its back when you presented this to your wife.
I’ll tell you what.
A woman came to this temple the other day and she also noticed it was hers.
She must be your wife.
She’s been staying in this temple since then.
Thanks to the old folding screen, the old couple could rejoin each other for the first time in 40 years.
They lived happily ever after.