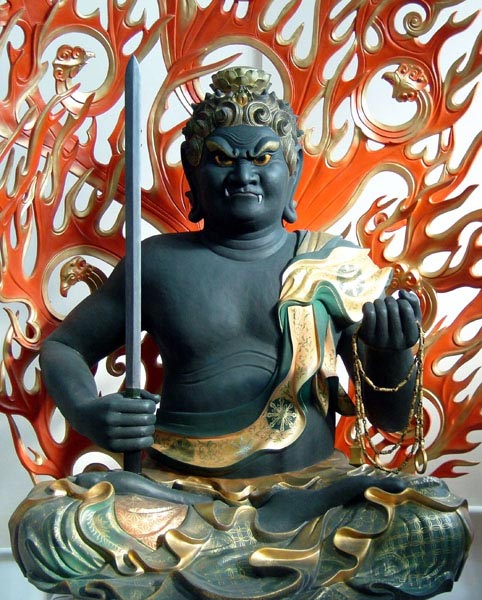 Long long ago, there lived an old artist in a town.
His specialty was to paint images of Buddha; especially Fudo Myo-o—the Buddhist Divinity of Fire.

One day he was painting as usual.
He concentrated his attention on his work.
The Buddha he was working on was almost finished, but he wasn’t satisfied with it.
He sat at the picture all day, took a look at it, and added a blush or two, and took another look, one more blush was added…

It was windy that night.
Suddenly a fire broke out from the neighboring house.
“Fire! Fire!” his wife panicked and cried.
But the artist was still gazing at his picture with a frown and arms crossed.
Soon the fire started attacking his house.
The smoke came into his room with the sounds of burning.
No time to escape!
His wife pulled his sleeve desperately, and cried frantically,
“Get out, or you’ll be burned to death!”

The husband said to her calmly,
“Wait! I have to finish this work.”
He brushed her hand aside and kept on staring at the picture.
Then there was a big sound!
Part of the roofs was burned to the ground.
“Wow,” the wife jumped out of the room in a hurry.
The flame caught his picture.
The artist came to himself and rushed out of the burning house.
He had a very narrow escape from the fire.
Then he stood on the other side of the street to watch his house burning.
An hour later, it burned down completely.

“We feel great sorrow for you.”
the neighbors consoled him for his bad luck.
“…….”
he didn’t answer them, but kept looking at the ruins.

People came to him one after another to express their sympathy, but he said nothing.
It looked like he had been meditating.
His wife was worried about him and spoke to him nervously,

“What happened to you? Are you all right?”

He babbled something to her and smiled.
Seeing him, many people there thought that he had gone mad because he had lost his house.
His wife asked him again,
“Are you all right?”
Then he said to her rather clearly,
“I’ve kept painting for many years.
But I was never completely satisfied with my work.
Thanks to this fire, I’ve learned something important.
It was a wonderful experience for me.”

Somehow he looked happy.
People around him calmly listened to him.
“As you know I’ve painted images of Buddha with flames on his back.
Now I should say the way I painted the flames was wrong.
I’ve just learned how to paint the flames for the first time in my life.
That’s an eye opener for me.
I can’t wait to paint a new image of Buddha.
This experience will add a new perspective into my picture.”

Fudo Myo-o—its appearance is impressive, the angry face is scared.
But inside the Buddha is full of love to people who are agonizing.
The Buddha tries to give them a hand with a sword in its right hand, a rope in his left hand.
The flames on his back show they will burn people’s 108 worldly desires.
The images of Fudo Myo-o he painted from then on drew people’s attention.
They said his images seemed to sit in the real burning flames to save people.
They wanted to have one since just looking at the images, they felt relieved.
Soon he made enough money to rebuild a bigger house.
The Buddha painter Yoshihide was ranked among the most gifted artists at that time.