How foolish I am!

How foolish I am! 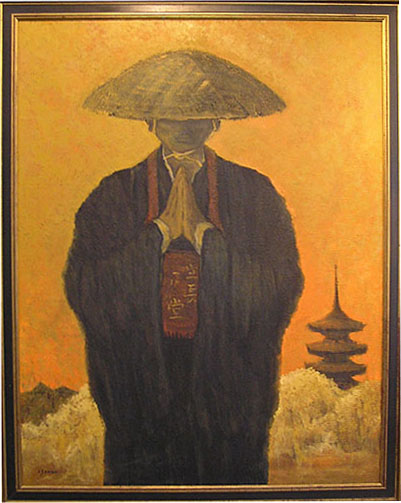 Long long ago, there lived a young man in a village.
He was full of energy as he looked forward to a happy life with his fiancee.
But he lost all his hope and energy when his fiancee died of a sudden illness.
He didn’t want to stay in the village anymore, so he left home to travel here and there.

Whilst exploring a mountainous area, he found an old hermitage.
It seemed like nobody had lived there.
He decided to stay there to be a priest.
He prayed in front of a Buddhist image every day, but he couldn’t chant a sutra by heart because he always thought about his late fiancee even while praying.

One day, when he went about asking for alms, he happened to meet a beautiful young woman who ran her own inn.
She looked just like his fiancee.
He said to himself,
“That woman reminds me of my fiancee.
Maybe I am predestined to meet her.”

The young woman told him that she’d run the inn by herself after her husband died.
The priest asked to stay at her inn for a night.
He was absolutely fascinated with the beauty of the mistress.
That night, he sneaked into her room, laid himself down beside her on her futon, and touched her breasts nervously.
The mistress woke up and cried,

“What on earth are you doing?”
“I’m a priest staying here tonight.
I fell in love with you at first sight,”
he said timidly.

“It’s unbelievable for a priest to do such a thing,”
she said as if she had been giving him a lecture,
“As I said, my husband died last spring.
After that, some men asked me to marry them.
But I made up my mind I wouldn’t remarry any man who had no clear goal.
Do you have your own clear goal?
Say, can you chant a sutra perfectly?
If you can, you may have a chance to make me obey you.”

The young priest confessed honestly that he hadn’t learned the sutra perfectly yet, as he was still absorbed with his late fiancee.

“In that case, you’d better go back and keep learning the sutra until you can chant it by heart.
When you master it, why not come here again?
Then I’ll let you do what you want to.”

His every day life was changed.
He spent most of his time learning the sutra.
He devoted himself to mastering it as hard as he could.
Weeks later, he could chant the sutra by heart perfectly.
He visited her again and chanted it in front of her.

“What a wonderful job you did!
You’ve mastered the sutra perfectly within such a short period.
But…I don’t want to sleep with a priest like you who is good at only chanting a sutra.
It seems like there are a few things you have not yet learned.
I’d like to sleep with a learned priest who’s had an experience to practice asceticism.
If you want me from the bottom of your heart, you ought to seclude yourself in the mountain to practice severe asceticism for…let’s see…three years.
When you finish it, I promise you’ll make love with me.
Until then I would never obey you even if you threatened to kill me.
We’ll meet again in three years,”
she declared.

He decided to live an ascetic life.
He spent day and night studying lots of sutras in the mountain temple for three years.
“Now at last comes my long-awaited day,”
he thought.
The learned priest visited the woman for the first time in three years.
She invited him to her room.
He saw a futon laid with two pillows.
“Did you succeed in being a learned priest?”
the woman said.

“Of course, I mastered tons of sutras,”
the priest said.
“Would you mind my asking some questions about which I am always wondering?”
the mistress said.
“No problem. Go ahead.”
She asked several questions while the priest replied smoothly and perfectly.
“It’s no doubt that you are now a learned priest.
Now that I have no reason to refuse you, I’ll obey you.”

She laid herself down on her futon to sleep with him.
The priest was so happy to be with her side by side in the same futon.
But when he was about to touch her, she whispered into his ear,
“Would you please let me keep lying still like this for a while?”
“All right.”
A few minutes later, the priest, as he had been tired after walking through all the way to the inn, fell fast asleep.
Then the woman appeared in his dream.
“To tell the truth, I’m not the mistress but the Buddha image you always pray to.
Although you’ve been a priest, your interest hasn’t been in learning sutras, but in women.
So I made you study the sutras and practice asceticism in the mountain with the shape of a beautiful woman.”

When he woke up, he found himself lying in a grassy field alone.
He realized his foolishness for the first time.
“How foolish I am!
I would never have guessed that woman wasn’t a real one but a great Buddha!
I’m now thankful to her for saving me from being a lost lamb.”

He returned to his hermitage in the mountain and devoted the rest of his life to learning Buddhism.