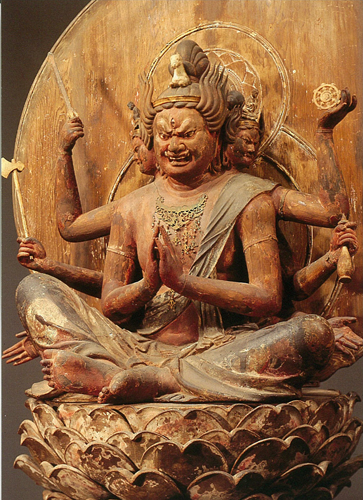 For centuries the Japanese people have enjoyed hot spring bathing.
There are many hot springs here and there.
Among which Kusatsu hot spring in Gunma Prefecture is one of the most famous ones in this country.
The water is believed to be able to cure injuries and illnesses.
One night, a man who lived in the village of Kusatsu had a strange dream;
a messenger appeared and gave him a revelation that Kannon, or the God of Mercy, would come to Kusatsu to take a hot spring bath around the next noon.

In his dream he asked the messenger to give him more clues to find the Kannon among lots of bathers.
Then the messenger said to him like this,
“He wears a beard and a hunting coat.
He is a man in his thirties, riding on a horse with a bow and arrows on his back.
That man is Kannon. You can’t miss him.”

The next morning he spread the message all over the village.
The villagers gathered at the hot spring to clean it in and out.
They put flowerpots along the road.
Then they waited for Kannon to show up momentarily.

The twelve noon had already passed.
When they almost gave up, a man on a horse appeared.
He looked just like the one that the messenger had described in the dream.
“That man must be Kannon.”
They whispered to each other.
Villagers knelt down on the ground and prayed for him.
The visitor of course was puzzled to see their strange conduct.
He asked them,
“What’s going on?
Why are you all praying like that?”

Nobody answered but they still kept praying with their head down.
He found a priest among the crowd standing by the road.
He was also praying with his eyes closed.
He asked the priest.
“What’s happening? Who are you praying for?”
The priest told the man about one of the villagers’ dream that the God of Mercy was coming here for bathing.

“You are trying to convince me that I am the God of Mercy?
Are you kidding?
I am just a hunter.
I came here to take a hot spring bath to cure my broken arm.
See, my right arm was broken when I fell from my horse.”

He tried to leave the place, but he couldn’t.
No sooner had he moved from the place than the praying people followed him in line.
At last he shouted desperately.
“Stop following me.
I am a hunter, not the God of Mercy.”

But he failed to escape from the passionate worshipers.
He had no choice to give in and said,
“Alright, alright, as you said, I am Kannon, the God of Mercy.
If you’d like, I’ll become a priest.”
He threw away the bow and arrows and took off his hunting coat.
People around him were so moved that they shed tears and cried,
“That dream is true!
The God of Mercy is here in front of us!”

There happened to be a merchant among the crowd who had once met the man and knew his real name.
He said,
“I know him.
His name is Bato (Horse Leader) living in the next province.”

He soon became a disciple of a famous priest and learned Buddhism.
Later he was called one of the high-ranking priests and had won the respect of all.