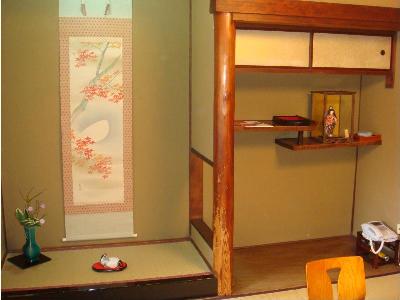 Long long ago, there lived a rich but stingy man in a town.
He forced his wife to cut down their living expenses strictly.
He told her not to waste money and checked every household expense.
He had never helped those who were in need.
In the end his wife was disappointed in him and left home.
The man and their two sons, Taro and Jiro, had to live by themselves.

One day, the man went out on business.
Before leaving, he said to his two sons,
“I’ll be back soon.
Please take care of things while I’m gone,”
he continues,
“Listen, I’ll tell you something important.
I have some deadly poison in the closet in my room.
I’m afraid the air from the poison could make you ill.
In the worst case, it could kill you.
Keep in mind, don’t enter the room. Understand?”

The boys looked at each other, and then answered in concert.
“Yes, Dad, we understand. Don’t worry about that.”
After their father left home, the boys were away from the dangerous room at first.
But soon they were overcome with the curiosity to see the poison.

“Why don’t you go to Dad’s room to see what’s in it?
Let’s fan away the poisonous air, so that the air won’t reach us,” said Taro.
“All right,” said Jiro.
They kept fanning with their folding fans and fearfully sneaked into their father’s room.
“Fan harder, Jiro,”
said Taro, and he opened the sliding door of the oshi-ire, a built-in closet for storing things.
He found a strange pot there.
“This must be it,”
he said, and put it on the tatami carefully.
He gazed at it for sometime, and then,
“I want to know what’s in it. Jiro, fan much harder,”
said Taro.
“Don’t uncover it. It’s pretty dangerous!”
Jiro tried to make him give up.
“Don’t worry. Keep fanning,” said Taro.
Jiro, sitting by Taro, kept fanning with all his efforts.
Taro dared to take off the lid.
There was nothing but some brown powder in it.
He picked a bit with his two fingers and licked it.
“How sweet!
It must be sugar.
I’ve heard it’s so expensive that ordinary people can never get it.
Maybe our father has saved money for this, and told us a lie to keep us away from the sugar pot,”
and then he declared loudly.
“I’ll lick it!”
Taro licked his index finger first, and put it into the pot.
He licked the sugar off it contentedly.
“Good! Sweeter than chestnuts!”
Gazing at Taro’s face, Jiro stopped fanning, and licked sugar after Taro
“Very good! Sweeter than sweet potatoes.”
They enjoyed licking the sugar again and again until it was gone.
Taro said,
“If our father knows we licked all the sugar, he will get angry and kill us.
We have to get out of this situation…okay, I have an idea.”
He walked to the alcove, pulled the wonderful hanging scroll on the wall, and tore it apart.
Jiro was surprised to see it, and said,
“Don’t do that!
That’s Dad’s favorite.
He will get much more furious with it.”

“Don’t worry. Now your turn.
All you have to do is break his teacup on the table.
That’s also his favorite,”
said Taro.

Jiro went outside with the teacup in his hand, and dropped it on a garden rock.
It was broken into several pieces.
He picked them up and put them on the table.

The man came home in a few hours, and found Taro and Jiro in his room crying.
When the two boys noticed their father enter the room, they started crying more loudly.
“What’s up, guys?” he asked.
“I’ve torn the scroll on the alcove in this room as I wrestled with Jiro.
I threw him to that corner.
But my own force drove me to the alcove.
That was your favorite, wasn’t it?”
said Taro with tears.
“Sorry, Dad, when Taro threw me, my leg touched the table and your tea cup was broken,”
said Jiro, he was also crying.
Then Taro said,
“We thought we could only make up by killing ourselves.
You’ve told us about your poison.
We talked and decided that we should take poison to die before your return.”
Then the two chanting together,
“We took poison a bit, but we couldn’t die.
We took it more, but we’re still alive.
What should we do? What should we do?”

Chanting, the boys ran away.
Their father took a look at the sugar pot and found it totally empty.
He ran after them crying,
“You, rascal! I’ll show you what I can do! Wait! Wait!”
But there’s no reason to scold them because he was the one who had told a lie.