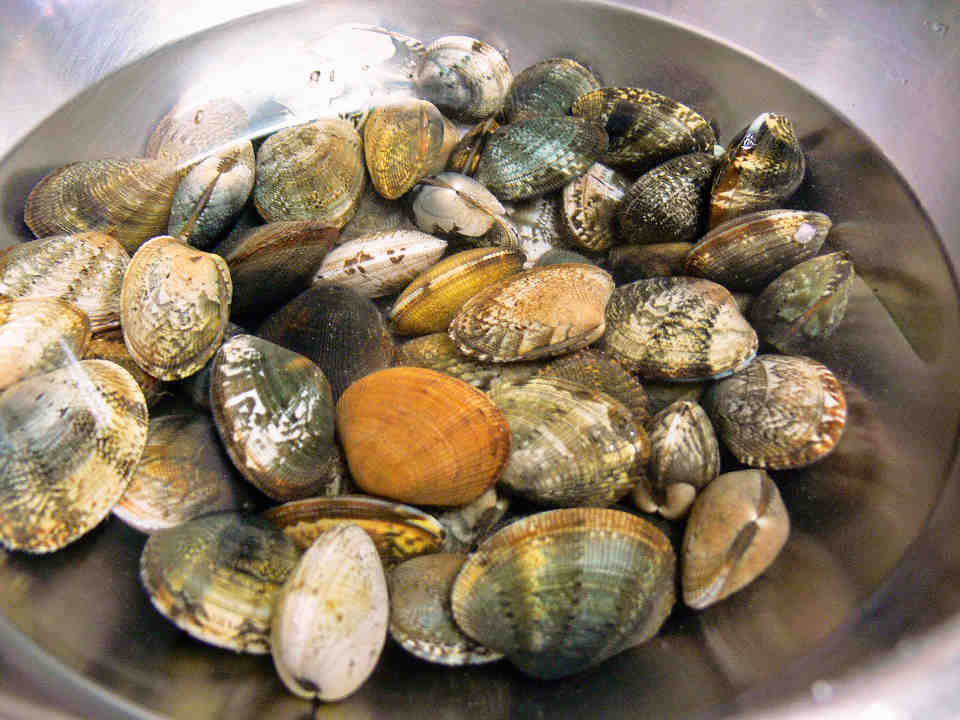 Long long ago, there lived a man of high position who was working for the court in Kyo, the capital at that time.
The man had a devoted wife.
But one day, he spotted a beautiful young woman and fell in love with her.
He started visiting the young woman very often.
At that time it was a common custom that noblemen had different wives at the same time.
They didn’t live with their wives.
Instead they visited their wives’ places as often as they could, and slept with them.
A thoughtful and gentle husband visited his wives all in turn.
But this man didn’t visit his old wife after he met the young woman.
It was obvious that his concern was only about his new wife.
His old wife felt very lonely.
She said to herself,
“My husband must have forgotten me. It’s so woeful!”

One day while he was on business, and stayed in a place a little far from the capital, he was served very tasty clams.
The next day he took a walk by the seashore and found some clams on which seaweeds grew and were swayed by the waves in the sea.
He said to himself,
“The clams must be the same kind I ate last night.
I want to show them to my beloved wife.”
He asked his secretary to take some clams to his wife,
“Take these clams to my wife as fast as you can.
Please tell her that I chose them especially for her interest and that I’d like her to enjoy them.”

The young secretary, however, took those clams to his master’s old wife by mistake, and told her about his master’s message.

The old wife was surprised.
It was an unexpected present after such a long time of loneliness neglected by her husband.
“Tell me where my husband is.
Is he traveling somewhere?”
she asked.

“He is now on business by the seaside.
He found these clams there and told me to take them to you,”
the secretary said.

“This young messenger must have mistaken my husband’s intention,”
she thought, but just said,
“Tell him that I safely got the clams, and that I appreciate his thoughtfulness.”

A few days later the nobleman returned and visited his young wife.
No sooner had he seen her than he asked,
“Have you gotten what I’d sent the other day?”
“I got nothing from you. What is it?”
she asked back.
“I found some clams with seaweeds on the shells.
I thought you must have been interested in them.
So I told my secretary to take them to you immediately,”
he said in bewilderment.
“I never got such clams.
If I’d have gotten them, I’d have enjoyed eating clams and seaweeds seasoned with vinegar.”

He came out of the room and asked the secretary,
“Who did you hand that clams to, I wonder?”
“I handed them to your wife, I mean to your first wife,”
the secretary said.
“Go and bring them back immediately.”
The young man hurried to the old wife’s place and asked her to give them back.
“As I thought, he didn’t send them to me, did he?”
she thought.
She brought the tub and a piece of high-quality Japanese paper on which a poem was written.
She covered the tub with the paper, tied with a string, and said to the messenger,
“Hold tightly. Be careful. Don’t let the water spill out!”
The husband noticed the poem on the paper.
Though the clams happen to be given me by mistake, I enjoyed watching them.
The poem reminded him of her sweet and elegant character.
He uncovered the tub.
“The clams are still alive in the water!”
he was greatly impressed,
“The young wife told me that she would have eaten the clams and the seaweeds, if she’d have gotten them.
Compared with that thoughtless woman, how nice and sensible the old wife is!”
He decided to visit the old wife again with the clams.
He got along well with her for long years.
As he completely lost interest in the young woman, he never visited her again.