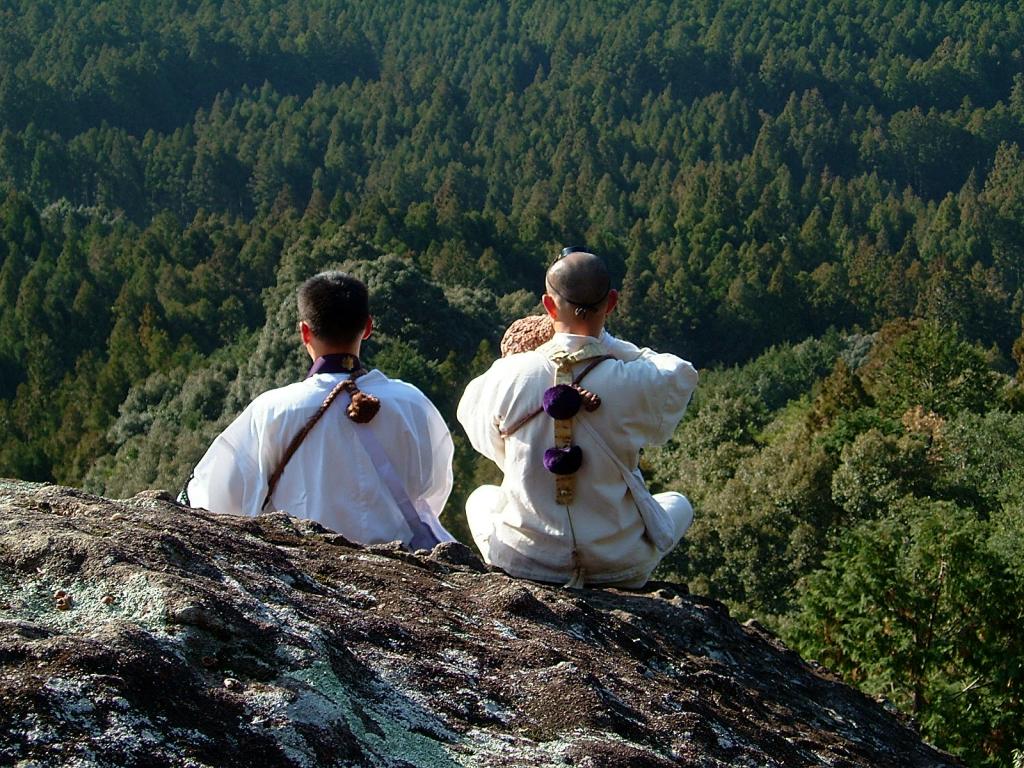 Long long ago, there lived a poor man and his wife in Kyo, the capital at that time.
One day the wife complained to her husband about their life of poverty.
“I’m fed up with my poor life.
We don’t have enough food to eat.
I’ve always worn the same kimono:
I never bought a new one.
We are poorer than beggars.
I can’t stand this miserable life.
If you would be a robber or a burglar, I might be happy because I could buy a new kimono.”

“What a silly woman you are!
I don’t want to be such a villain.
You see, there are lots of poor people around us.
Some of them are poorer than we are,”
the husband scolded her.

“Then I want to get a divorce from you.
Why don’t you divorce me?
I’ll find a rich man and remarry him,”
she said.

He loved his wife so much that he never imagined the days without her.
He was worried about her complaining every day.
He was afraid that his wife would be disgusted with him.

One evening, he passed by a woman who was wearing a nice kimono.
Before he could realize it, he killed the woman, and robbed her of her clothes and money.
He hurried back and said to his wife,
“You told me that you want me to be a burglar.
I killed a woman and got her clothes and money.
Oh, I am a terrible man.”

But she wasn’t surprised to hear that, rather, she looked happy to see the beautiful kimono he brought.
He still loved her.
But he felt a sense of strangeness for his wife.
The next day the wife wore the kimono he’d brought and went out.

It was a big shock when he knew his wife was killed by someone right after she went out.
“That must be punishment for the murder I did,”
he thought.

The man left the house and climbed to Mt. Koya (in Wakayama) to become a priest.
He gave his prayer day after day and kept holding a memorial service for the woman he had killed.

One evening, he had a visitor who had just become a priest.
They talked with each other about themselves.
The newcomer said to him,
“I’d like to know what made you become a priest.
As for me, I used to live in Kyo.
But I had a tragedy there and threw everything away to be a priest.”

The host priest said to the new priest,
“I also lived there. But I committed an outrageous thing and became a priest.”

The visitor said to the priest,
“If it doesn’t bother you, would you mind telling it to me in more detail?
I won’t talk about you to others. I promise.”

The priest told him about his sin.
The visitor, who showed an interest in it, asked him some questions in a row,
“When did you kill the woman?
What was the color of her Kimono?
How old did you think she was?”

The priest talked to him without keeping anything back.
He listened to it very seriously, nodding many times while listening.
When the priest’s confession reached the end, the listener said to the priest.

“What a story it is!
To tell you the truth, the woman you killed must have been my beloved wife.
I have to tell you I also killed a woman I met just the next day.
That woman wore my wife’s kimono.
I asked her when and where she had got it.
She didn’t say anything and ran away from me.
I ran after her and stuck her to death on the street.
Suddenly, I decided to be a priest… Without these horrible incidents, I would never have been a priest nor learned the doctrine of Buddhism.
In other words, you led me to become a priest.
Let’s hold a memorial service for our late wives together.”
They took hands with each other and began to cry.
They secluded themselves in the mountain to practice severe asceticism.