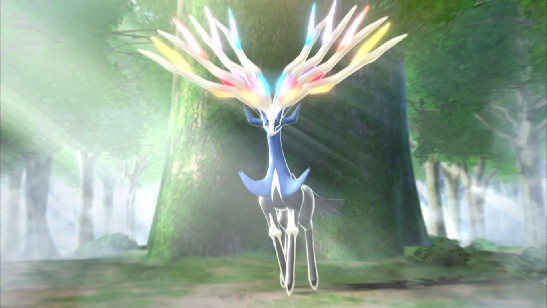 Long long ago, there was a very rare deer in a deep forest.
It had golden antlers and its coat had seven colors like a rainbow.
The deer was always afraid that it would be caught for its beautiful coat and antlers.
So it lived alone in the deep forest hiding away even from other fellow deer so that it wouldn’t be found by anybody.
Yet the deer had a friend: a crow.

One day the deer climbed down the hill to get some food.
It was a fine day after a heavy rain.
So the river had risen, and flowed rapidly.
When it reached the river, the deer wanted to drink some water.
Then it heard a cry.
“Help me! Help…m..e!”
“Who is it?”
it looked around.
The deer noticed that a man was being carried away by the rapid current.
The man caught a branch, but it broke off.
He kept on being washed down.
“That man is about to be drowned,”
the deer thought.
It plunged into the river, put the man on its back, swam as fast as its legs moved, and at last it managed to reach the shore.
The deer knelt down and dropped him off on the grass.
Soon the man recovered, and noticed that the deer which looked at him had saved his life.
He said in a weak voice,
“Mr. Deer, you saved me from drowning, didn’t you?
I owe you my life.
I’ll never forget you.
What should I pay you as my gratitude?”

“I don’t want anything.
It’s natural that I should help the person in need.
But may I ask a favor of you.
Never tell anybody about me.
I hear that human beings are very greedy and they want to get anything they find.
If they heard about me, they will come here and catch me to sell my coat and antlers,”
said the deer.

He nodded and said,
“I promise.
You saved my life.
Why should I break the promise?”

A month later, the lord’s wife in the province had a strange dream.
She said to her husband about the dream she had the night before,
“In my dream, I was in the forest.
Then a beautiful deer with seven-color coat appeared from nowhere, and greeted me.”

“Your dreams are always prophetic.
There must be that kind of beautiful deer somewhere in my province.
I’ll make my men find the deer,”
he said.

He had several signposts put up in his province.
It said;
Anyone who tells us information about a deer which has rainbow color coat shall have money as a reward.
People looked up, read it and talked about it with one another,
“What? A rainbow-color coat deer?”
“There can’t be such a deer. The lord is really crazy.”

No one but one man knew such a beautiful deer.
He was the very man that had been saved his life by the deer.
As he lived in poverty, he wanted the reward from the bottom of his heart.

“If I tell the lord where the deer is, he’ll give me a lot of money and I’ll become rich.”
The moment he rushed into the castle, he had totally forgotten his promise to the deer.
Listening to the poor man, the lord said to him,
“My wife’s dream will come true.
Show us to the place immediately.”

The man agreed to lead the people to the place where the deer was: the lord set out for the forest and his men followed him with bows and arrows.

The beautiful deer lay sleeping on the grass in the clearing in the forest.
Then it heard its friend, crow give a sudden cry on the top of a tree.
“Oh, no! Numbers of hunters led by the lord are coming toward you.
They will find you and kill you.”

The deer also recognized many footsteps coming nearer and nearer from every directions.
“If I can’t escape from those people, I’ll be shot by somebody.
It’ll be better for me to go to the lord and be killed by him directly.”
The deer started stepping straight to the lord with pride and courage.
The hunters were surprised at the deer’s sudden appearance.
It was so beautiful that all of them just looked at it.
Soon they came to and surrounded the deer with bows and arrows.
The lord told his hunters,
“Wait! Now the deer is coming to me without any fear, it must have some reasons.
Never shoot it.”
The deer kept approaching to the lord, and stopped to kneel down in front of him.
To their surprise the deer spoke to the lord,
“I live in this deep forest for fear that I should be found by people.
My Lord, how did you know my place?”
“It is this man that showed me where you lived.”
He pointed at the man hiding behind him.
It was the very man that the deer saved in the river.
The deer said to the man,
“When I saved you from drowning in the river, you promised not to tell anybody about me.
But today you came here to kill me.
If it is true, you are a great liar.”

The man hung his head deeply, and said nothing.
Listening to it, the lord felt great sorry for the deer and said,
“I understand well what you said.
Though you are a deer, you saved this man’s life.
On the contrary, he, a human being, betrayed you.
It is clear who is dependable or not.”

The lord told his men to capture him and cut his head.
The deer said to the lord in a sorrowful voice,
“Please wait!
Now he must regret what he did.
So please save his life.
The lord was so moved by the words that he decided to exile him into a deserted island instead of killing him.
Moreover, he had some signboards set up. It said;
The animals must never been shot.
Those who kill them shall have death penalty.
From them on, people stopped hunting not only deer but also other animals.
The lord’s generosity spread all over and his province became a more peaceful and prosperous place.