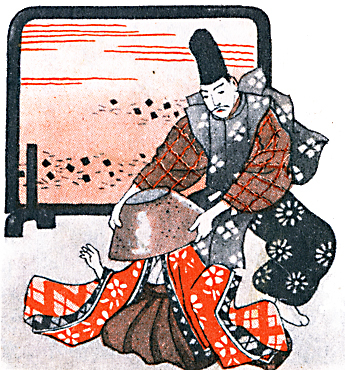 Long long ago, there lived a rich and sophisticated couple with a little daughter in a town.
They loved poetry, music, books and so on.
When their beloved daughter was thirteen years old, her mother suddenly got seriously sick.
The mother said to her daughter at her bed,
“It’s a great pity to say that I have to go to the next world soon, leaving you and my husband behind in this world.”
She was a most devout woman. She added,
“Kannon, the Buddhist deity of mercy, said in my dream, ‘You should fill a small box with something important for your daughter in the future.
Put the box on your daughter’s head, and then cover them with a big wooden bowl.
As you ask me, I’ll protect her after your death.’”

Saying so, the mother put a small box on her daughter’s head.
Moreover, she put a huge wooden bowl upside down on the box.
Leaving her little daughter behind, she passed away soon.

After the woman’s funeral, her husband tried to remove the bowl from his daughter’s head with all his strength.
But it was attached on her head so tightly he couldn’t remove it.
“It’s a pity that I lost my wife, and what’s worse, I can never remove the bowl from my daughter’s head.
She was the most beautiful girl in the town, but look, how ugly she is now!
People will treat her like the handicapped.”
He mourned deeply.
Some time later, he got remarried to a young lady with his relatives’ insistence.
The step mother didn’t love the handicapped girl.
Especially after she had her own baby, she hated the daughter-in-law all the more, who was tormented by her mother-in-law everyday.
She told her husband the false report about the girl,
“Your daughter is cursing not only my little daughter and me but also you in front of your former wife’s grave.”
At last her father thought about the false report as a true story, and ordered her,
“What a horrible child you are to curse us!
I can’t stay with you here at the same house, such a handicapped and undutiful daughter like you.
Leave here immediately and go away anywhere you like.”

Her step-mother took her beautiful clothes off, made her wear shabby clothes instead, took her to a distant country, and left her alone behind in a field.
After weeping for a long time, she began to wander around without any purpose until at last she reached a big river.
“It’s better to jump into the river to die than to keep walking aimlessly.
I’d like to see my dead mother again in the other world.”

She jumped into the river, but because she wore the big wooden bowl on her head, she couldn’t sink deep in the water, but floated down the river.
A young man on a boat happened to find her and picked her up.
He was one of the four sons of the lord.
He said to her,
“Where are you from? And who are you?”
She answered the man,
“I lived a little far from here.
After my mother passed away, nobody cared about me.
Nobody liked a handicapped girl like me.
So I jumped into the river to kill myself.”

He tried to remove the bowl from her head, but it was impossible.
“Do you want to work at my house?
Do you have any specialty to work?”

“I have nothing to boast about, but when my mother was alive, I learned music, and to read books and sutras from her.”
“So how about working as a bath attendant in my house?”
Since then, she worked hard at the lord’s: she cleaned the bathtub, made fire woods, and prepared the bath from early morning to late night.