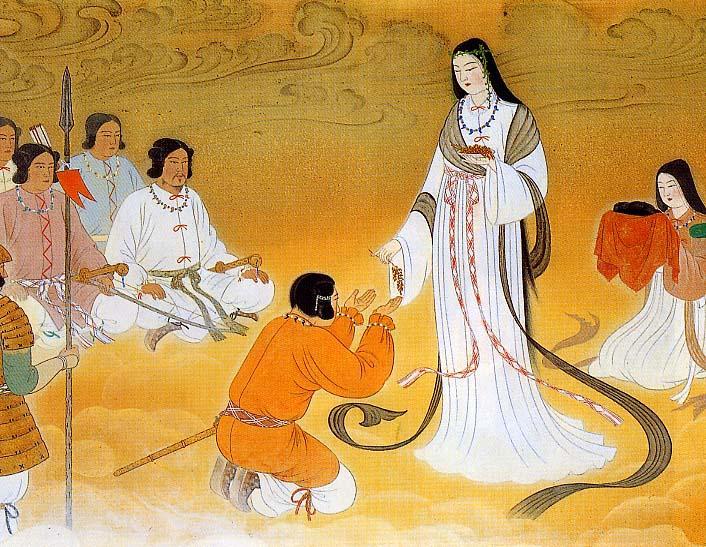 Long long ago, people in the ancient Japan believed that the days were ruled by the Sun Goddess, and the nights by the Moon God.
One day, the Sun Goddess had a visit from her brother, the God of the Storm.
He was such a rough god that, during his stay, he committed several evil acts such as trampling the Goddess’s paddy fields, filling the ditches with mud, and making her palace a mess.

As she loved her brother, she had endured his rough behavior over and over, and again and again.
Not noticing her consideration, however, the crazy god became more radical until at last he threw a raw horse skin from the roof of the weaving room.
Some weaving maids were injured, and others were shocked to death.
That was the last straw!
The Sun Goddess couldn’t endure his behavior any more, and cried,
“I can no longer stand him.”
Saying so, she hid herself inside a huge cave.
Now that the Sun Goddess was in the cave, the world remained dark.
Ghosts and evil spirits began to show up and make fusses here and there.
The gods and goddesses were so anxious about the circumstances that they had a meeting.
“We must find the way to get her out of the cave at all costs.”

“We should make her open its door.”
“What should we do for that?”
When they were talking with one another, the God of Wisdom said,
“How about having a pleasant dancing performance in front of the cave?
She must wonder what’s going on outside and will open the door.”
“That’s a good idea.”
All the gods and goddesses present agreed and prepared for it.
The Mighty God stood beside the door to open it all the way in case the Sun Goddess opened the door a little bit.
A mirror was hung just in front of the door.

Before long, all the gods there gathered sitting in a circle.
Then the Beauty Goddess stood on a barrel which was set in the center of the gods’ circle, and began to dance.
It was so comical and sexy that they all laughed, cheered, and clapped their hands.
Some of them started dancing with her, and the laughter echoed around as if the heaven shook heavily.

“The world must be covered with darkness because I’m hiding here.
I wonder why they are so cheerful.”
She asked the gods outside,

“What on earth are you laughing so loudly?”

“We have much greater Goddess here than you.
That’s why everybody is feeling happy and enjoying the banquet here.”

Out of curiosity the goddess opened the door a little to peep outside.
What she saw was a mighty goddess’s bright figure; in fact it was herself in the mirror hung in front of the cave.
She wanted to look at it more closely, and opened the door a little bit widely.
Just when the Mighty God pulled the door open with all his strength and got her out of it.
As soon as she appeared from the cave, the gods and goddesses let out a big cheer; the world regained full of light.

The God of the Storm was punished severely and exiled from the Sacred Heaven.
He descended to Izumo