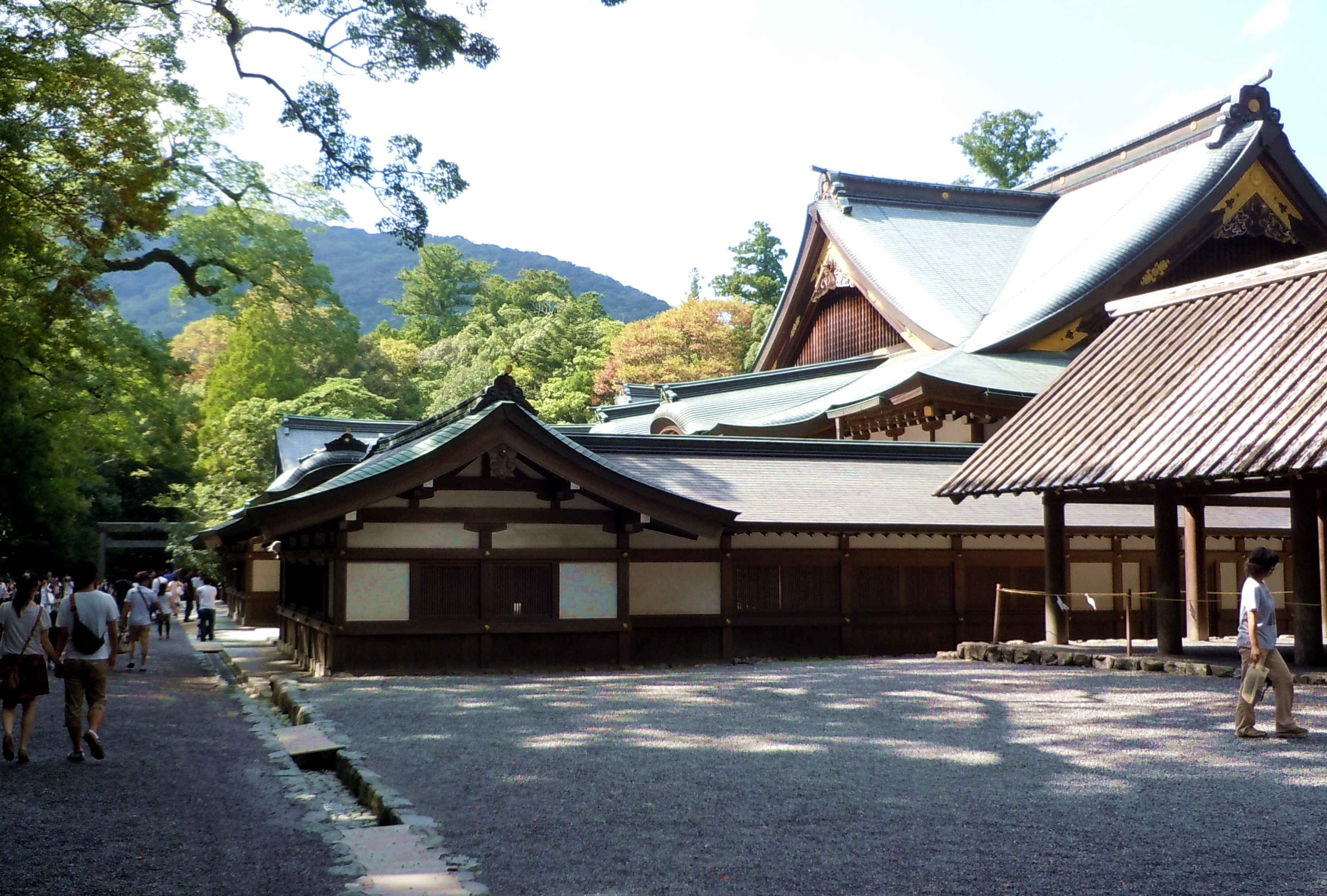 Long long ago, there lived a young farmer in a village a little far from Mt. Fuji.
He was poor and couldn’t read or write.
One day in spring, he worked in the field as usual, thinking about some of his neighbors who were heading for Ise Shrine.
(Ise shrine is in Mie Prefecture, dedicated to the Emperors’ ancestors: the highest ranking of Gods in Japan.
In old days, especially in Edo era, a visit to Ise Shrine was people’s lifetime wish.
So they would lead a frugal life, and set aside money to visit there.)

The man also wanted to visit the shrine with his neighbors, but he was so poor that he couldn’t afford to accompany them.

Not to far from his field, there was an old pond called the Red Pond.
After finishing his work in his field, he started cutting grass around the pond with a sickle.
Nobody told him to do so, but whenever they overgrew, he always cut them.
Then a beautiful woman appeared in front of him.
The man was startled at first.
He’d never seen such a woman in the village.
But as she was so beautiful and spoke to him gently, he regained calmness.
“Hi, young man, I’m the Goddess of this pond.
Thank you so much for cutting the grass around it.
I’ll give you whatever you want in return.
What do you truly want?”

“Well, to tell the truth, I wanted to visit Ise Shrine with my neighbors.
But I don’t think such a day will ever come to me,”
the man said.

The Goddess smiled at him and said,
“Oh, it’s easy for me.
I’ll give you enough money to go there, but with one condition.
You have to lend me a hand.
Would you mind handing this letter to my sister?

“Of course, not. Where does she live?”

“On your way to Ise Shrine, you’ll find the Blue Pond at the foot of Mt. Fuji.
When you reach it, clap your hands, and a woman will appear in front of you.
That’s my sister, the Blue Pond Goddess.”

“It’s an easy task. Count on me.”
Then the Goddess gave him some money and handed him her letter, and then he left for Ise Shrine.
On his way, he had to drop by the Blue Pond.
When he reached near the foot of Mt. Fuji, he found a woman working at a teahouse.
He asked her,
“Excuse me, but would you tell me the way to the Blue Pond?”
“I know where it is, young man.
But why do you want to go there?”
She looked perplexed,
“No one wants to go to the Blue Pond, because it is in a sea of trees.
Besides, people believe that an ogre lives there.”

The man told her why he had to complete his task, and showed her the Goddess’s letter.
The woman was surprised when she finished reading it.
“Oh, my goodness! You shouldn’t go there. It’s dangerous.”
“What?”
“You are going to be killed! Didn’t you read this letter?”
“I can’t read nor write.”
So she read it for him out loud. It said:

This man cuts grass around my pond every year, and that deprives me of my hiding place.
To avoid this situation, I could do nothing but eat him.
But if I did so, villagers would suspect that someone is in the pond.
I told him to visit you and hand this letter to you.
You can eat him if you like.
That would be a great help.

He was shocked with speechless fear.
“You look scared. But don’t worry. I’ll rewrite it for you.”
In those periods, not only this young man but also many people were illiterate.
How lucky he was to meet such a woman who could read and write!
The letter she rewrote was like this:

This man cuts grass around my pond every year, so I want to give him a reward.
Will you give him something good for me?
If you can, a horse that produces gold is the best.

Thanks to the woman, he reached the Blue Pond with the letter, and clapped his hands.
Soon a goddess appeared from the water.
He handed the letter to her.
Reading it, she looked a little puzzled, but after a while, she said to the man,
“I see what my sister is asking in this letter. Come with me into the pond,’
He didn’t understand what she said at first.
Looking at his confusing face, she repeated the same thing, and then added,
“Put your arms on my shoulders and close your eyes until I say ‘OK’.”
He put his arms on her shoulders and closed his eyes for a while, then he heard her ‘OK’.
Opening his eyes, he found himself in a gorgeous room surrounded with golden folding screens.
“I must be on the bottom of the pond.
What a fantastic atmosphere!”
he thought.

He spent several days there merrily: eating, drinking, dancing and singing.
But suddenly his wish to visit Ise Shrine flashed into his mind.
“It’s about time to leave here,”
he thought and asked the Goddess to let him go back to the surface.
The Goddess agreed and gave him a horse, saying,
“This horse is a reward for you from my elder sister, Red Pond Goddess.
Give it a cup of rice instead of hay, and you’ll get a gold ball every morning.”

He mounted the horse happily, and said to her good bye.
Of course his destination was Ise Shrine.
Surprising enough, as soon as he thought of it in mind, he was in front of the gate of the Shrine in an instance.
After finishing worshiping Gods, he wanted to return home.
Then he found himself in front of his house.
He kept the horse on the earth floor in his house and gave him a cup of rice to get a gold ball every morning as the Blue Pond Goddess had told him.
Before long, he became rich.
As is often the case with old stories, there lived a greedy old man next door.
The old man peeped into the young man’s house from a small hole on it, and found his secret horse.
The greedy man said to himself,
“If I were that young man, I’d feed more rice to that horse, so that I’d got more gold balls.”
He waited for such a day when the young man wasn’t at home.
One day, the chance finally came.
He sneaked into the young man’s house and fed much rice to the horse.
“Eat it, and produce a gold ball for me,”
he shouted.
As he wasn’t satisfied to have only a gold ball, he fed more rice to the horse and shouted again and again.
The more gold balls he got, the greedier he became, and kept shouting.
“Eat it, eat it more!”
“Neigh!”
Neighing loudly, the horse gave a strong fatal kick to the old man, jumped out of the house and never appeared anywhere in the village again.