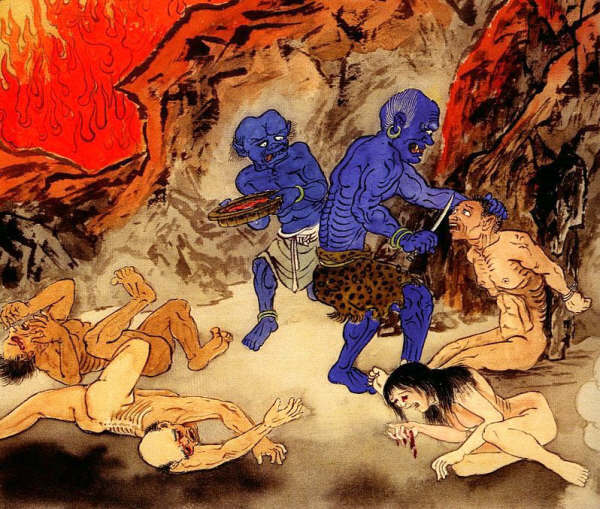 This is an old story about a man who had a rare experience in the other world.
He had once died and been to the other world.
People around him couldn’t believe that a healthy man like him could have died so suddenly.
The next day they saw one more unbelievable scene, that is, the man had come back to life!
The following is the story of what the man saw and heard while he was there:
“When I breathed my last breath, two strangers came to me at once: one was an old man, the other a boy.
I followed them walking along a path and reached a golden bridge shining dazzlingly across a big river.
We walked backward over the bridge, and then arrived at a huge castle gate.
“Where are we?”
I asked the old man.
“We are at the Southern Entrance of Hell,”
he answered.
Then I was surrounded by eight soldiers with swords or spears.
It seemed like they had taken over the role of the first two guides.
We were walking along a busy street.
Finally we arrived at a golden castle.
I saw a man wearing a royal crown sitting on a golden chair in the castle.
He turned a stern face to me.
One of the soldiers said,
“You are now in front of Yama, the king of Hell. Kiss the ground!”
I groveled at the feet of the king.
“The reason why I got them to bring you here is that your wife had wept and appealed to me,”
the king said solemnly.
He told the followers to bring the woman in front of him at once.
They bowed and left and soon came back with a woman who was really my late wife.
She had a lot of nails driven into her from head to toe, and her hands and feet were bound tightly with a thick wire.

“Do you know this woman?” Yama asked.
“Of course, I do. She used to be my wife,” I answered.
“Then do you know the sin which caused you to be here?”
“No, I don’t.” I shook my head.
The king asked the woman the same question.
“Of course, I do,” she answered in anger.
“He kicked me out of our house for no reason.
I was so angry that I appealed to the king to bring him to Hell.”

The king looked into a thick book for a while and said to me.
“I couldn’t figure out why she’d been kicked out for no reason.
So I double checked it, and found out you had a reasonable reason to treat her like that.
I declare that you aren’t guilty.
You can go home.
But you should keep in mind, what you’ve seen and heard here must be secret.
Don’t leak anything about Hell.
Do you swear to me?
By the way, if you want to see your father, go to the northern Hell.”
“Thank you, Yama.
I appreciate your fair judgment.
I’ll never talk to anyone about Hell.
I swear!”

“I greeted the king and headed northward.
And there, I met my father who was standing against a red heated pillar on his back with thirty seven nails driven into his whole body.
He told me that he had nails driven into him and had been beaten with an iron whip nine hundred times every day; in the morning, in the afternoon and in the evening, three hundred times respectively.

Seeing his torments of hell right before my eyes, I couldn’t help crying.
“Father! I’ve never thought you’ve gone through these torments of hell.”
He said to me painfully.
“Do you know, son, why I am suffering these kinds of pains?
To support my family, I once killed animals and insects.
I cheated people to get more money, I robbed some men of their possessions, I didn’t take care of my parents, nor did I respect the elders.
What was worse, I despised and treated the poor like slaves.
Because of these kinds of 37 sins, they’ve driven me with many nails and beaten me nine hundred times with the iron whip every day.
How sore and how painful it is!
When shall I be forgiven these sins?
When shall I get rid of the suffering?
If you should be allowed to return home, you’d better make an image of Buddha, copy sutras and atone for my sins.
Never fail to do it!
One more torment is hunger.
I’ve never been allowed to eat any food for three years since I came here.
On the night of the seventh of July three years ago, the night of the Star Festival, I changed myself into a snake and went to your house to eat offerings.
But as soon as you found me, you picked me up with a stick and threw me away outside.
On the Boys’ Festival of the fifth of May the next year, I went to your house as a dog.
But to my surprise, you kicked me outdoors.
I was unable to eat any food then either.
On the New Year’s Day this year, I entered your house as a mouse.
This time I succeeded in cramming my mouth full of the offerings for the first time in three years.
I could fill my three years’ hunger at last.
If you dispense one syo (1.8 litter) of rice to people in need, you can get 30 days of food in hell.
If you give a set of clothes to them, you can get one year of clothes here.
If you read a sutra, make an image of Buddha and save animals’ lives, you may go to Heaven.”
I’m afraid of how many kinds of punishments we’ll have to take in Hell.
On the way to the golden bridge, a gatekeeper stopped me. He said,

“You can’t get out of this gate.
Once one has passed the gate and entered this world,
he can not return alive.”

I was at a loss standing there, and thinking that I might ever wander in Hell.
I asked him again and again to allow me to repass the gate so that I might return home.
Then the boy, who was one of the two guides that had brought me to hell, appeared from somewhere.
Looking at the gatekeeper and me, the boy implored the gatekeeper to open the gate door.
He reluctantly agreed and pointed out a small side-door.
“Come here!” the boy called me and showed me the side-door.
“May I ask who you are?” I asked.
“I’m the Sutra of Kannon.
Do you remember you copied the sutra when you were young?”
Opening the door, he pushed me out on my back, cried,
“Hurry up!” and he closed the door.
I came back to life in this world like this.
I thought of the punishments my father in Hell had taken.
I immediately started making an image of Buddha and copying sutras to reduce my father’s agonies.