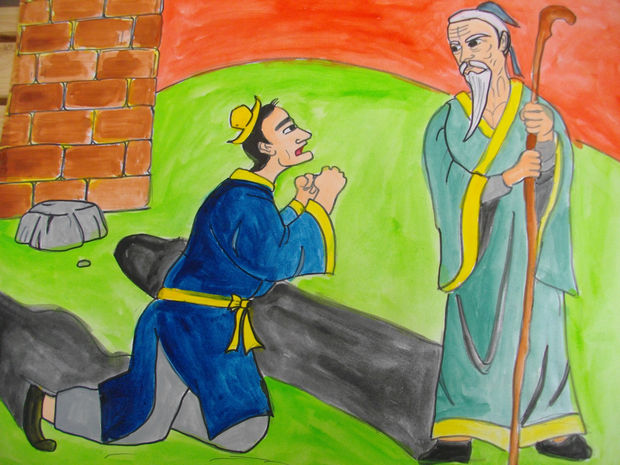 Part 1
One spring evening, a young man stood against the walls of the west gate of Luoiyang, the capital of Tang.
He was absentmindedly looking up at the sky.
The young man named Tu Tze-Chun used to be a son of a rich family, but he had eaten up all the fortune his father had left him.
Since then he couldn’t have even led a hand to mouth life.
At that time Luoiyang was one of the busiest cities in the world.
People and carriages were coming and going constantly on the street.
But Tu Tze-Chun was still absentmindedly looking up at the sky, leaning against the wall of the gate.
A mist was trailing across the sky and a white crescent moon was seen dimly.
“It is getting dark.
I’m hungry.
What is worse, I have no place to stay tonight…I hate to live such a miserable life.
I might as well just jump into a river to die.”
he was turning over various things in his mind.

In the evening sun, the gate cast a shadow onto the ground, when a cross-eyed old man abruptly appeared in front of Tu Tze-Chun.
The old man said to him arrogantly,
“What are you thinking about?”
“Me? As I have no place to stay tonight, I’m worrying about that,”
as the young man was asked suddenly, he gave the old man an honest answer involuntarily, casting his eyes down.

“I see. I feel so sorry for you,”
thinking a while, the old man pointed at the setting sun, and continued,
“I’ll tell you something good for you.
Stand in the setting sun, look at your shadow, and remember the part of your head.
Dig that place at night, and you’ll surely find a cartload of gold coins there.”

So surprised, he raised his face.
Strangely enough, the old man wasn’t there any more nor a shadow of him left.
Instead, the crescent moon looked whiter than before, and a few bats were flitting over the crowded street.

Part 2
Tu Tze-Chun became the richest man in the capital in just a night.
As the old man had told him, he secretly dug the part of his head in the shadow and had gotten a cartload of gold coins.

He bought a gorgeous house and began to live in luxury: he drank expensive liquors, ate delicious meals, planted fine trees, let several peacocks loose in the garden, had a wagon made of aromatic trees…you name it.

Soon the rumor spread across the capital.
His friends, who had scarcely said hello to him on the street while he had been poor, came to see him every day.
The number of visitors was increasing day by day, and he threw a party after party for them.
There was a limit to what he could spend.
He got poorer and poorer.
At last he became penniless.
Human beings were cold-hearted.
Even his friends who had visited him yesterday didn’t say hello to him today, and no one gave him a place to stay for a night or just a glass of water.

One evening, Tu Tze-Chun leaned against the wall of the west gate of the capital again looking up at the sky absentmindedly, when the cross-eyed old man suddenly appeared before him and said to him again,

“What are you thinking about?”

The young man, with his head down shyly, didn’t answer him.

“What are you thinking about?”

“To tell the truth, I have no place to stay tonight, I’m wondering where to go,”
he answered timidly.

“I see. I’ll tell you a good thing for you again.
Stand in the evening sun, dig the chest of your shadow at night, and you’ll find a cartload of gold coins again.”

Saying so, the old man disappeared into the crowd.

As soon as he became the richest man in the capital again, he began to live in luxury the same as he had done three years before.

Within three years he used up all his money and became poor again.

It was the third time that the cross-eyed old man showed up and asked the young man who was leaning against the wall of the west gate, looking up at a crescent moon absentmindedly.

“Me? As I have no place to stay tonight, I’m wondering where to go.”

“I see. I feel so sorry for you.
I’ll tell you a good thing.
Stand in the evening sun and dig the stomach of your shadow at night, and you’ll find a cartload of gold…”

Just the moment the old man was about to finish, the young man raised his hand to stop him talking.

“Thank you, sir, but I don’t need any more gold coins.”

“You don’t need any gold coins?
It seems like you are sick and tired of a luxurious life,”
the old man stared at him doubtfully.

“No, I’m not tired of luxury but I’m completely fed up with people!”
he answered back brusquely.

“How interesting! Why on earth are you fed up with people?”

“They are all cold-hearted.
While I was rich, they often visited me.
But once I became poor, they ignored and turned away from me.
Even if I became rich again, it made no difference to me any more.”

Listening to him, the old man began smirking.

“I see. You are young, but I think you are a sensible person.
From now on you are going to have a life of poverty in peace, aren’t you?”

The young man hesitated to answer for a while, but raised his head and stared at the old man as if he had something to appeal to him.

The old man furrowed his brow in thought, then smiled at him and said,

“Indeed I’m a mountain hermit.
When I saw you for the first time I thought you might be sensible, so I made you rich twice.
If you want to be my pupil, I’ll let you be.”

Tu Tze-Chun bowed to the old man many times with great joy.

“You need not thank me so much.
Even if you are my pupil, it’s up to you whether you can be a great mountain hermit or not.
Anyway, you should come to my mountain with me.
Luckily I found a bamboo stick here.
Ride on it, and the stick will lead us to my mountain.”

The old man chanting a spell, it flew up into the evening spring sky, carrying them toward the mountain.