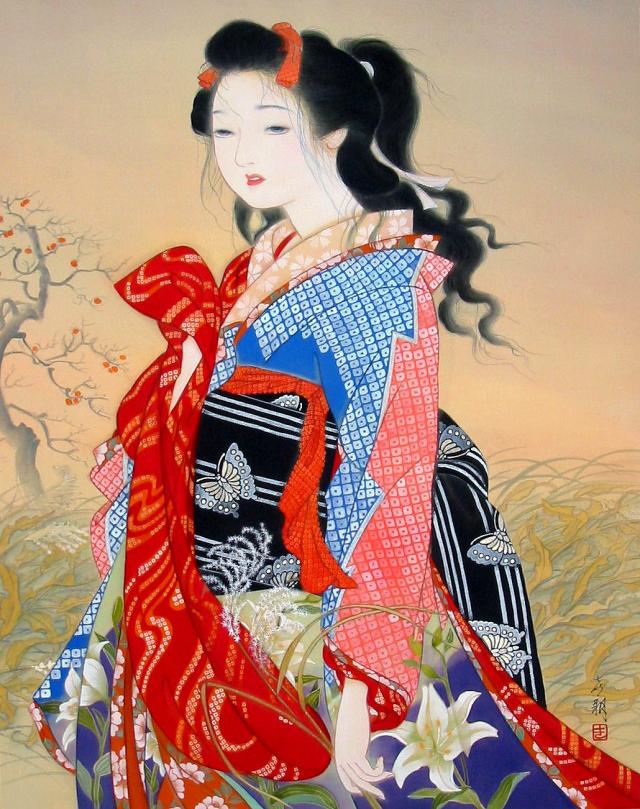 In the Edo period of the 17th century, there was a wholesale rice store called Tajimaya in Himeji, now in Hyogo Prefecture.
The owner Kuemon had a 16-year old daughter named Onatsu, a girl of exceeding loveliness.
She got flooded with offers of marriage, but turned them all down.

One day, they hired a new employee Seijuro—a son of a sake brewer in Murotsu, west of Himeji.
He used to be the brewer’s heir, but his father disowned him as he had been tempted to commit a double suicide with a prostitute.
Although his counterpart had died, he’d failed to die.
He was sent to a temple for a while, but one of his relatives was so worried about his future, and gave him advice to work at Tajimaya as an employee so that people would forget the case someday.

He reformed himself, and tried to forget what he had done before.
He acted as if he had been a totally different person and worked hard for the store.

One evening, he asked a maid working at the same store to fix his obi (a broad sash).
When the maid unsewed it, she found some letters in it.
As the letters had been sent to him by lovesick-prostitutes, she and her fellow maids were excited and read them in turn.

The maid showed those letters to Onatsu, the rice wholesaler’s daughter.
Onatsu became interested in him, and wondered what Seijuro was like who had been loved by prostitutes.
She began to picture his handsome face on her mind.
In a nutshell, she fell in love with him.

Meanwhile, Seijuro became more popular among maids since they’d read love letters sent to him.
In fact some of them started sending him letters.
Onatsu also wrote to him.
She kept writing one after another.
That affected his daily life.
He was captivated by her purity and beauty, became absent-minded and neglected his work.
But they seldom had a chance to meet each other as there was a social barrier between them; one was a daughter of a rice wholesaler, while the other was only their employee.
They spent every day and night just longing for their beloved one.

One day in spring, people working for the rice wholesaler went on an outing to see the cherry blossoms near the beach.
Onatsu accompanied them. It was a fine day and the cherry trees were in full bloom.
They stretched a long rope between trees to make a square space for them.
Then they hung some beautiful kimonos on the rope like curtains, so that they could enjoy drinking, eating, and chatting inside without being disturbed by other parties.

Onatu didn’t enjoy viewing cherry blossoms very much.
Her concern was only about Seijuro who was standing outside to escort the store-people’s party.
She thought it was the chance of a lifetime.
But her maids were keeping an eye on her.
She became irritated.

Just then, they heard sounds of a drum and a flute a little away from them.
That was the music for Shishimai, a ritual dance performed in a lion’s mask as an exorcism.
People rushed to the performers and circled around them.
All the women from the store except Onatsu also rushed to the crowds.

No sooner had the maids gone than Seijuro sneaked inside.
Without a word, he embraced his master’s daughter tightly and they slept together in broad daylight.
Their hair was disarray, but they didn’t care.
They whispered with each other,

Once love is burning up, it is very difficult to extinguish it.
They finally decided to take the plunge to run away to Osaka, the busiest city in the Kansai District.

A few days later, they slipped out of the store, hurried to the port hand in hand and boarded a boat bounded for Osaka.

He said to her on the boat,

“People will forget us as time goes by.
I won’t mind the poverty as long as you are with me.
Let’s rent a row house on a backstreet, and start our new life there.”

She smiled back at him happily.

But things didn’t go well for them.
A hikyaku, or the express messenger, left a bundle of letters at the port and the boat returned back to retrieve them.

As soon as the boat reached the shore, they were caught by their pursuers: Onatsu was constrained into a cage, while Seijuro was taken to a jail.

What was worse, he was suspected of an unexpected crime; they said, he made Onatsu steal 700-ryo kobans (oval Japanese gold coins in the Edo period) from her father’s store, and tried to run away with her.

He insisted that he hadn’t stolen any money, and it might be a frame-up, but they wouldn’t listen to him.
He couldn’t prove his innocence.
After all he was executed on 18th of April 1661, at the age of 25.

One day in June, when the maids were airing their clothes in the warehouse, they found that 700-ryo in an oblong chest, which the master had completely forgotten.
They were more than upset by the fact, but what was done couldn’t be undone.

In the meanwhile, Onatsu who had been confined to a room without knowing Seijuro’s sad news, prayed earnestly for his safe day by day.

One day she heard children singing outside like this;

Since they killed Seijuro, Onatsu should be killed.

She asked her nurse about what had happened to him.
Cross-examined by Onatu— the nurse shed tears and began to confess that he had been executed.
His death was a great blow to Onatsu.

Is it Seijuro who’s going through over there?

‘Cause that sedge hat looks like the one he’d worn there.

Since they killed Seijuro, Onatsu should be killed.

It’d be better for her than the agony in this world.

She didn’t feel her father’s grief any more.
Her eyes were blank and just mingled with children, dancing and singing, with a grin on her face.
She visited the mound his body had been buried through wind and rain.
Onatsu lost her mind completely.
Her mind might be wandering around the cherry trees where they’d met that day.