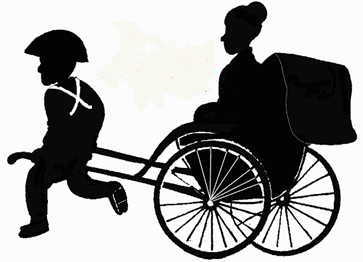 Long long ago, there lived a poor young carpenter in a village.

One day, he was on his way home from work helping to build a house in a town.
Walking along a lonely road with a carpenter’s toolbox on his shoulder, he was remembering his old friends.
Most of them had left their village to get more money to feed their families, or to make their dreams come true.
But he had been living in the village since he was born, where his parents were laid to rest.

It was getting dark, and what was worse, it began to snow.
He quickened his pace.
Just then he saw a rickshaw getting stuck in a gutter ahead of him.
Even in the dim light, he could see them in trouble.
An old lady was standing by the road at a loss, watching a rickshaw man trying to pull it up.
The young man rushed to them to give him a hand, and cooperated with him in pulling the rickshaw up out of the gutter.
Finally they made it.

“Thank you, for your help,” said the rickshaw puller.

But he couldn’t pull it smoothly no matter what he tried.
The carpenter found that one of the wheels had just come out of the body which made it impossible to move.
He took out a hammer and some nails from his toolbox and crawled under it.
Although he got some scratches on his hands and his clothes became dirty, it was repaired perfectly.

When he finished the work and put the hammer back in his toolbox, the old lady said to him,

“Today is my mother’s anniversary, so I visited the village where my mother is laid to rest in the grave.
As you see, on my way home, my rickshaw got stuck. I can’t thank you enough for helping me. How much do I owe you?”

He’d never expected to get money from such a job.
He only wanted to help someone in need.
He remembered a lot of people who helped him in the past.
He said,

“If you really want to pay for it, remember me sometime and please be kind to a person in need the next time you come across.
That’ll make you involved in the chains of goodness.”

Standing still there, he saw them off.
It was becoming colder, when he headed home but he felt warm in his heart.

A few kilometers up from that place, the old lady made the rickshaw stop in front of a teahouse.
She wanted to have tea and something to eat to warm her against the chill before she got home.
As soon as she sat at a table, a young woman wearing plain clothes came over and offered a dry towel to use.
The young woman smiled at her,

“Please wipe your wet hair with this towel.
It’s very cold out there, isn’t it?
Keep yourself warm near the fire.”

“How kind she is!”
the lady thought.
She noticed that the young woman was nearly nine months pregnant and looked not so rich.
She remembered the carpenter’s words.

Finishing a snack, she handed the young woman money for her snack and slipped out of the restaurant soon after the waitress went away to prepare the change for her.
When the young woman came back with the change, she couldn’t find her customer in the room.
She wondered where the old woman was, but soon noticed a memo and money which was left on the table.
It said,

On the way here I was helped by a man and when I tried to pay for his work, he said to me,
“If you really want to pay for it, remember me some time.
Please be kind to a person in need the next time you come across.
That’ll make you involved in the chains of goodness.”

This money is for you.
I hope it will help you.
You can keep the change too.

When she got home from work that day, she talked to her husband about the old lady and showed him the memo and the money she found on the table.

“How could she know we need money?”
said the husband.

Indeed their life would become tighter as their baby due was coming soon.
She knew that her husband was very worried about that.
That night she gave a soft kiss to her husband lying by her and whispered gently,

“I love you. Everything will be all right.”