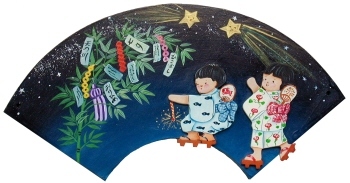 Long long ago, the Lord of Heaven had a beautiful daughter who was a skillful weaver.
The brightly colored cloth she wove was so beautiful that everyone praised her for her work.
She was so fond of weaving that she spent every day at her loom.
When she was old enough to get married, God, her father, looked for a suitable young man; young, handsome and worked hard.
He found a cowherd who was good at keeping cows and worked very hard.

When the cowherd Altair met the weaver Vega, he thought he had never met such a beautiful girl in his life.
Vega also thought what a handsome young man he was.
In a nutshell, they fell in love with each other at first sight.

Soon they started their married life.
They did nothing but enjoyed their sweet life at home: Vega lost her interest in weaving, so she didn’t sit at her loom anymore; Altair didn’t work on the field or feed his cow either.
God, their father, thought it seriously wrong and warned them to do their work as they had done.
But they ignored his warning.
Their behavior invited God’s anger.
A river made from stars was placed between Altair and Vega.
The river, Milky Way, was becoming wider and wider.
At last they couldn’t see each other’s shape any more.
However loudly they shouted, it was impossible to hear each other’s voice.
That was the divine retribution against them.

She sat at her loom so that she could forget him, but she couldn’t weave any more because her eyes filled with tears.
On the other hand he was so absent minded day and night that he didn’t go to the fields to work.
His cows became thinner and thinner and the fields got worse and worse.

God felt pity and anxious about them.
One day he said to the couple who was crying and wishing to meet again, staying still on both side of the Milky Way.

“My daughter, providing you weave at a loom again, I’ll permit you to meet him. Can you swear to do that?”

“Yes, of course. If I could meet him again, I’ll do anything you’d tell me to,” she swore the God.

“My son-in-law, providing you work in the fields again, I’ll permit you to meet her again. Can you swear to do that?”

“So you can meet each other here on the night of the 7th of July every year,”
God said to them.

That night, the separated couple was out by the Milky Way, staring at the opposite side of the river shore, when a flock of magpies flew over and made a bridge with their wings until the couple could meet again over the Milky Way.
How happy they were when they met again for the first time in a year!

That’s how they can meet each other once a year.

This story originally came from a Chinese legend.

The Star Festival has been celebrated in Japan on the night of the 7th of July.
People, especially school children, write their wishes on slips of colored paper and attach them to branches of bamboos, and place them outside of their houses.

Sendai City in Miyagi Prefecture and Hiratsuka City in Kanagawa Prefecture are famous for their Star Festival display along the main streets, and millions of visitors enjoy walking through the decorated streets.