The lyre in Burma Part 1

The lyre in Burma Part 1 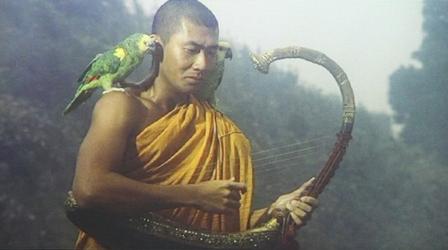 After World War Ⅱ, Japanese soldiers, who had been sent to the front; Asian Continent and the South Sea Islands, were sent back to Japan.
Their families, who were eager to see their sons, fathers and brothers, came to meet them at ports.
Those discharged soldiers were all thin and pale, and seemed to have no energy; some of them who were sick or injured were carried on stretchers.

Among them, there was a group of ex-soldiers who were lively and always enjoying singing songs together.
They sang even in duet or trio.

“Why are they singing songs so happily?
What were they eating during the war?”
the rest of the soldiers were puzzled.

The group was from Burma, where they had been under risks many times, but they always sang under a young commander, who had graduated from a music school in Japan.
Thanks to him, they could survive during the war without being depressed too much.

One of the ex-soldiers spoke to me like this;

We sang many kinds of songs: carols; chansons; famous songs of England, Germany, Italy and Japan.
Especially ‘Home, Sweet Home’ was one of the songs we sang many times in trio and quartet, which reminded us of our home towns.

We used to sit around Superior Private Mizushima who was good at playing the lyre.
We listened to his performance with our arms folded and eyes closed.
We sang ‘Home, Sweet Home’ and he accompanied us on the lyre.

Soon the war situation was getting worse and worse.
At last we had to escape into a deep mountain.

One day we were surrounded by enemies.
We felt some people approaching us, talking with each other in English.
Maybe they were sent to reconnoiter.
One of them said,

“It’s dangerous!”
the other said.

“Don’t worry too much.
There aren’t any Japanese here.”

It seems they didn’t notice us hiding behind them.
One lit a match, so we could see two British soldiers sitting on a rock.
Then one of the two began to whistle.
Soon the other sang to it.
It was ‘Auld Lang Syne’.

“Ah, I wonder what my parents are doing now,”
one of them said.

Then, the sounds of playing the lyre were heard from a distance.

“I have no idea, but what beautiful sounds they are!”
the other said.

The two stood up and climbed down the hill to the valley from which the sounds of the lyre were coming.

We realized we had a narrow escape.

Mizushima was 22 years old, and looked like a born and bred Burmese when he wore a red and yellow waistcloth on his naked hip.

“I am….a Burmese….Burma is a good country….”
whenever he spoke in broken Burmese, we couldn’t help laughing.

One day we were invited by the people in a small village.
We sang several songs in return.
Strange to say, one of the most famous songs in Japan ‘The moon over a ruined castle’ pleased them most.
They gathered around us to listen to our chorus.
However, I should say, Mizushima’s performance with the lyre overcame our chorus.
When we were singing a famous German song ‘Roslein’, we noticed something unusual was happening; before we were aware, all the villagers had gone and we had been surrounded by the British army.
Our commander said to us in a low voice,

“Keep on singing! If they think we’ve noticed them, they’ll shoot us at once.
We must pretend not to notice we’ve been surrounded.”

Then Mizushima climbed a big box filled with explosives and started playing the lyre on it.
He intended to protect the explosives from British army’s attack; if they had shot aiming at the box, not only Mizushima but also all of us would have been killed.

We never stopped singing.
We chose some pieces in slow tempo like ‘The Last Rose of Summer’ and ‘Home, Sweet Home’
When we finished singing ‘Home, Sweet Home’, we heard the same melody from the forest.
They were singing that song but in English, then they started singing ‘The Last Rose of Summer’
We’ve never doubted these songs were all original Japanese ones.
But they really were the old English songs.
While they were singing, they may have recollected their childhood, their parents, and their hometowns.

We were no longer enemies but friends.
We gathered around the fire hand in hand, and sang songs together.

To listen to the English soldiers singing ,’If a body meet a body,the thing is…’. one of us began to sing ‘Comin’ Thro’(Through) the Rye’ in Japanese.
Both English and Japanese soldiers strode off with their arms over each other’s shoulders.

Mizushima accompanied us on the lyre, and he was given big cheers.
Seeing him shedding tears on his cheeks, both sides of soldiers sang together with tearful eyes.

Without fighting, we threw down our arms and were taken prisoner of the British army.
They informed us that the war had already ended three days before.