The lyre in Burma Part 2

The lyre in Burma Part 2 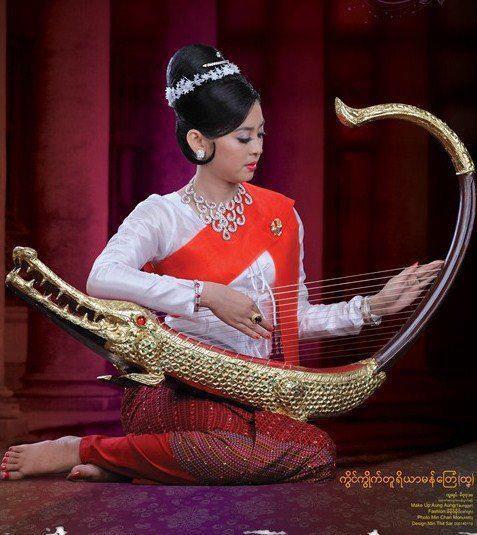 One day our ex-commander heard about a Japanese army barricading themselves in a cave of a mountain.
They were rejecting surrender.
He called Mizushima, and said,

“They are still fighting against the British army.
Soon they will be annihilated.
I’m afraid they are going to choose a useless death.
I asked a British officer to have one of us go persuade Japanese soldiers to make them surrender.
And he gave me a go-sign.
Would you go there and dissuade them not to kill themselves?
I know this is a very challenging task.
If you don’t want to go, then I’ll go there to do it.”

Mizushima kept silent for a while, but soon said decisively,

Ten minutes later, we saw him walking along the path far below the cliff with an English soldier and a guide.
Meanwhile, we went down to a southern town by train and bus.
We would stay at a prisoners’ camp there for a while until we could return to Japan.

Since then, we’ve waited for Mizushima to come back and rejoin us.
We’d missed him so much and complained like this,

“We can’t sing well without his lyre.”

“We can’t work effectively without him.”

“I should have gone there instead of him.”

But Mizushima never showed up in front of us.

One day, we were told to renovate an old bridge in the suburbs of this town.
Several days later, we finished the work.
We walked back across the bridge we had renovated, where we bumped into a Burmese priest walking toward us with a blue parakeet on his shoulder.
We were very surprised to see him as he looked just like Mizushima, although the priest was in a Buddhist priest’s attire; a yellow robe, and got his head shaved.

“He is Mizushima’s double!”
one whispered to another, and the words spread to the rest of them like waves.

But the priest passed us without showing any expression.

We were also involved in renovating a charnel for British soldiers who had died during the war.
When it was completed, a splendid funeral was held for them at the charnel.
We were permitted to see the long procession to the charnel by the road.
Among a lot of Burmese priests walking in front of us, we saw the priest we had met on the bridge…resembling Mizushima.
Look! He held a box covered by a white cloth hanging from his neck.
It was the Japanese way of carrying remains!

“Ah!” our ex-commander cried in a low voice.
He might be… We were all eyes, watching him walking off.

One day when we sang in front of a huge Buddha statue lying in a cave of the cliff, beautiful sounds of lyre came to our chorus.
We looked around while singing.
On finishing our chorus, we ran toward the place where we thought the sounds had come from, and tried to find the player.
We cried again and again,

“Mizushima! Mizushima! Let’s go back to Japan together!”

The day when we would return to Japan had come at last.
That very day, an old native woman, who had come to the prisoners’ camp to sell things many times, came to see us.
She took out a bird from her pocket.
That was the parakeet our ex-commander had asked her to hand to Mizushima the other day….which was trained to speak…

“Hi, Mizushima, let’s go back to Japan together.”

But the bird cried,

“I can’t afford to go back with you.”

“It has learned such Japanese. We don’t need it anymore. Let it go.”

“This isn’t the same bird you gave the priest.
It’s the brother parakeet.
Look at it closely.
It’s a little bigger than that and the feathers are more beautiful.
It’s the bird for you from the priest in return.”

“I can’t afford to go back with you.”

Then the old woman handed a thick envelope to our ex-commander.

“The priest…asked me to hand this letter to you.”
Apparently, it was from Mizushima!

At the departure, Japanese soldiers waved their hands to the old woman who was standing at the gate to see us off.

Three days later, we were gathered on the deck of the ship heading to Japan, and sat around the ex-commander.
He unsealed the envelope, took out about 30 sheets of paper from it, looked around us all, and began to read it.

Dear Commander and My Comrades

I miss you so much.
I’d like to be with you, work together, sing together, return to Japan and meet my mother and friends desperately.
But I decided not to go back to Japan.
I vowed to stay in this country to do my duty, since I’ve found bleached bones here and there on the ground.
How can I leave them there as they are?
I want to bury them, hold funerals and pray for them…”

I’ll talk to you about how I have been doing since I parted from you.

I failed to persuade the Japanese army to surrender.
The time I was given by the British officer was almost gone.
At last I said,

“They’ll attack you in three minutes.
On my way back, I’ll be killed under both sides of shooting.
When you see and confirm my death, you should surrender to the British army.”

Under fire, I ran out toward a stump lying half way between both sides, and played the lyre on it until I got injured badly.
Gradually I became unconscious, but under that situation, I felt something like I’d been watching a magic lantern; a white flag was flown to halt fighting, Japanese soldiers were getting out of their fort one by one, and the shooting from the British army stopped.

Fortunately, I was saved by a tribe in a deep mountain, where I was given enough food and treatment for injury.
Thanks to their kindness I gradually recovered.
But actually they were a cannibal tribe, and waited for my recovery to eat me.
When I was about to be eaten, the chief’s daughter asked her father to save my life.
The day I left the village, she gave me a Burmese priest’s robe to put on.
She also handed me an armlet which was only permitted to high-ranked priests to wear.
Later, it helped me a lot as a Burmese priest.

Wearing the yellow robe, I headed for your camp in the south.
On my way, I saw dozens of bodies left on the fields.

I gathered dead trees and branches and set fire to burn them, dug a hole for the remains and set a tomb there.
It took me for a week.
During those days, I stayed at a village nearby to do it.
I joined my palms together for them and kept going to my destination.

One day I happened to see a shack.
Opening its door, I found a body in a Japanese military uniform there.
It was covered with ants and maggots.
Beside it, there was a picture of a young father holding a little boy, who must have been waiting for his father to return.
I carried the body on my back to the forest and buried it with the picture.

On the way here and there I buried Japanese soldiers’ bodies.
However, what shocked me most was a mountain of decomposed bodies thrown away into a swamp by the river.
It was more than I could handle.
I didn’t do anything but put my palms together in prayer and left there.

When I passed by a cemetery, I saw a group of English people drooping their heads and giving a silent prayer in front of a new tombstone.
Then they sang ‘Home, Sweet Home’.
After they left, I was staggered to see the tomb.
It was carved, “A Grave of the Unknown Japanese Soldiers.”

What a shameful man I am to leave the bodies in the swamp without doing anything for them, while even the English people prayed and sang for Japanese dead.

I decided not to come back to you, to your camp.
So I walked back toward the river.
On my way, I happened to see you on the bridge.
I felt my heart bound with joy, sorrow, and embarrassment.
But I had already decided not to return to Japan.
I couldn’t reveal myself.
I had to make you believe, “Mizushima was dead in Burma.”

When you were singing before the huge Buddha Statue and heard the sound of lyre I played, you must have been surprised.
I really wanted to tell you,
“I am here. I am still alive. Let’s sing together.”
But I am now a Burmese priest, so I can’t see you again.
I can’t hug you.

I am becoming busier and busier here day by day.
I must make every possible effort not only for Japanese spirits but for the people in this country.”

I can’t completely write my farewell words to you.
The day has at last come when I must part from you forever.
I’ll be wandering around in this country from now on.
Whenever I feel I miss you, I’ll play the lyre.
Thank you so much for your kindness to me for years.
I wish you all a happy life in Japan.

The ex-commander finished reading the letter.
We remained silent for a while.
Soon it got dark.
Above us in the night sky, innumerable stars were beautifully twinkling.
We sang together quietly.
The waves of sounds accompanied our songs like the sounds of a lyre.