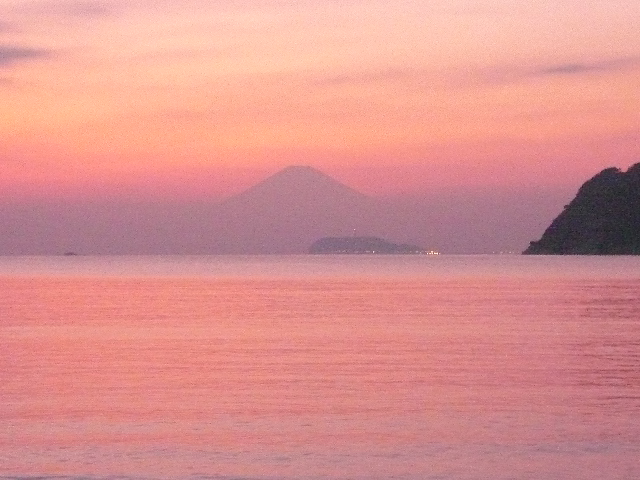 Long long ago, there lived a rich landowner who had lots of fields and a gorgeous mansion.
In spring, he used to hire a great number of people to make them plant rice in his field.
One year, although many employed farmers were planting rice from early morning till evening, they hadn’t finish the work yet when the sun was about to set behind the mountains.

The millionaire said to them aloud on the top of the hill,

“What’s taking you so long? Hurry up, or the sun will set in the west.”

When the sun was just about to set, he opened his fan in his hand and cried to the sun,

As strange as it was, the sun stopped setting.
The whole villagers burst into cheers and they could finish their work while the sun was still shining.

The old millionaire, who stopped the sun setting, came to be called “The Setting Sun Millionaire”.

Another year, they had a long drought.
The sun baked the rice fields hard.
The rice plants were dying from the lack of water.

The millionaire was at a loss and prayed to the heavens for rain, standing on the lakefront for a few days.

“Oh, Dragon God! If you give rain over my field, I’ll give you one of my daughters.”

Soon it began to rain so heavily that the rice paddies got enough water.
The rice plants soon recovered.

He had three kind-hearted daughters.
The eldest daughter knew his father’s agony and agreed to offer herself as a sacrifice to the god.

She said to her father,

“If we don’t keep the promise, not only our family members but also the whole village will have misfortune.
I’m willing to die for everyone.”

Overhearing this, the second daughter went before them,

“Sis, you will be the successor of our father.
I’ll be the sacrifice for the god instead of you.”

Both of the two daughters had firm resolution to sacrifice themselves for the god and never came to a conclusion.

One night, the youngest daughter left her house secretly, leaving a letter saying like this,

～I overheard your discussion. I decided to be the sacrifice for the dragon god.～

She was holding a Kannon(The Goddess of Mercy) statue in her breast pocket.

When she got to the lake, she began to recite a sutra with the small statue in her hands.
Soon a large dragon appeared on the surface of the lake to swallow her.
As soon as the dragon opened his huge mouth, the Kannon statue jumped into its mouth.
The dragon became quiet and spoke to her,

“I was a servant working for one of your ancestors.
I was thrown into this lake for my sin and became a dragon.
Now thanks to your mercy and kind heart, I can go up to the heavens.
I’ll give you good advice.
If you go to the village on the opposite side of the mountain, you’ll find your happiness.”
saying so, the dragon went up into heaven.

She went there as she had been told by the dragon and worked as a maid for a rich family.
Soon she was loved by their son and married him to live a happy life.

The millionaire soon forgot his misbehavior and began to be puffed up with pride.
Looking at a swan on the lake, he tried to shoot her,

Though some of the villagers persuaded him out of doing such a foolish thing, he cried to them,

“You, idiot! I’ll never have the wrath of God. I’m a man that can stop the setting sun.”

He shot an arrow at the swan, which, though she was almost shot to death, flew away toward the north.

“She must be a messenger of the shrine.”
The villagers whispered with one another.

After that, the millionaire’s fortune began to decline.

He decided to bury his money.
One night, he made some people dig a big hole in the slope of his mountain and bury it,
and what was worse, he poisoned those who helped him bury all his money to keep his secret.

The millionaire’s families and relatives were cursed one after another; some families had a fire, strange illness,
and others went crazy and killed themselves.

The millionaire himself got sick badly and soon passed away.

His funeral was so simple, because the villagers were afraid of the curse and nobody visited it.
They said that his two daughters also got sick and breathed their last at home.