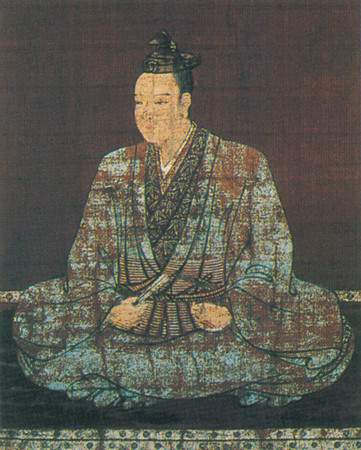 In the period of civil wars in the 16th century, Akechi Mitsuhide, a famous warlord, worked so hard for his lord Oda Nobunaga that he was allowed to have his own fief in Tanba (Kyoto Prefecture), and built a castle in Kameyama.

At that time, he was called by his first name Ju-bei, and was still unmarried, but he had someone in mind he decided to marry who lived in Ohmi (Shiga Prefecture) with her parents and younger sister.
When the girl was eleven years old, Ju-bei made a promise with her parents that he would marry her in the near future.

Seven years had passed and he sent a letter saying that he would like to meet his fiancee at his castle.

Reading his letter, the sisters’ parents were at a loss, since something bad had happened to their two daughters.
They had gotten smallpox.
The younger one got over it soon while the older one had gotten a serious case, and her face and body had pitted from smallpox all over.
Eventually she was not as beautiful as she used to be.

“It is our first daughter that he promised to marry, but I hesitate to send her to his castle.
What shall we do?”
her father grieved, while her mother cried.

“Showing her face in public is a great humiliation for her, let alone seeing her fiance, Ju-bei.
How about sending our second daughter to his castle?
She had caught the same illness, but she recovered pretty soon.
She is as beautiful as her sister used to be.
The groom-to-be hasn’t seen his fiancee for many years.
He may not notice that the bride is a different person,”
said the mother.

“That’s a good idea indeed.
He hasn’t seen our daughters for a long time.
He won’t notice if his fiancee is the real one or not as the two resemble each other.
Even if he would notice it, it wouldn’t be a big problem.
I’m sure he will be contented with our second daughter,”
the father agreed.

“I feel sorry for my elder daughter, but she is sensible.
If we explain our concern, she’ll understand it,”
said the mother.

First, they called their first daughter, and showed Ju-bei’s letter.

“We’ve talked about your marriage.
After you have caught smallpox, you’ve lost your beauty in your appearance.
We are hesitating to send you to him.
After a long thought, we decided to send your sister instead.
We feel very sorry for you, but this is your destiny.
Please understand this.”

With tears in her eyes, her mother tried to persuade their poor daughter into giving up her marriage.

Prepared for the worst, she didn’t seem to be discouraged a lot by it.

“I’ve already decided not to marry him.
With this ugly face, I don’t want to see my dear Ju-bei any more.
Luckily my sister resembles me in appearance.
Besides, she is smart and kind by nature.
She is a person suitable for him as his wife.
Don’t worry about me.
I’m going to be a nun,”
their daughter answered once and for all.

Her parents burst into tears when they heard her decision.
They felt pity for her, but what was done had to be done.

Next, they called their second daughter, and said,

“Ju-bey’s letter says that he’d like to marry you.
You are beautiful and old enough to marry.
So we are planning to send you to Kameyama castle in a few days,”
said her mother.

She was so surprised to hear it, and said,

“It is absurd of you to say such a thing.
If my elder sister got married already, I’d marry anybody you both told me.
But she is unmarried and stays at home, so I think it is out of order.”

They didn’t know what to say.
After a while, her father said,

“You’re absolutely right.
If possible, we want to do so, but your sister told us that she decided to become a nun.
I’ll take her to Hokkeji-temple in Nara if she won’t change her mind.
You should only think about your marriage with Ju-bey.
He is now one of the greatest generals in the Odas.
He knows the military arts very well.
What’s more, he is highly respected by his lord, Nobunaga.
He will succeed in his life.
We’ll be so happy if you get married to a warlord with a bright future.
Grant our wish.
We do want you to be happy.”

Being told seriously by her parents, she felt inclined to accept their wish.

“Though I feel great sorrow for my sister, if you two tell me to marry him, I’ll go to Kameyama castle.”

Her parents got so pleased at her words that they made arrangements and chose a good day to send her to Ju-bei’s castle.

Ju-bei was so pleased to see his fiancee for the first time in seven years.
Little did he dream that the beautiful young woman sent to his castle was actually his fiancee’s sister.
Finishing exchanging the nuptial cups, he gazed at her for a while as he felt a slightly different.
He tried to remember her face in her childhood.

‘She used to have a spot near her ear.
Now she doesn’t have it.
I wonder if she had it removed,’ he said in his mind.

As he was staring at her face so long, she finally said to him,

“You are thinking of a spot near the ear, aren’t you?
As you see, I don’t have one, but my sister does.
She was much more beautiful than I am, but because of the smallpox, her face isn’t as beautiful as it was.
She decided to be a nun and will go to Hokkeji-temple in Nara to serve under Buddha.
When I was told about this marriage, I thought it was out of order and an absurd thing that I’d get married to you instead of her, but I couldn’t refuse my parents’ wish.
Now that I felt your deep love to my sister, I can’t stay here any longer, to say nothing of marriage with you.
Please forgive me for my foolish behavior.
I’ll also become a nun today right now.”

Saying so, she suddenly pulled out a dagger to cut her beautiful long hair.

With astonishment, he hurriedly stopped her.

“Wait! Don’t be so rash!
Even if you become a nun, it won’t be settled.
On the contrary, a groundless rumor will be spread all over.
I have a good idea.
Stay here for five days before you return home.
Indeed you are a wonderful daughter of a Samurai family.”

He soothed her not to cut her hair.
They spent time in different rooms and never met each other for the next five days.

He sent her back to her parents with his letter on the fifth day.

It is your elder daughter that I promised to marry.
Even if she had suffered from the smallpox and has a figure pitted all over, I don’t mind it.
She is still my fiancee.
She will make a good wife for me.
I’ll make her happy forever.
Please give your elder daughter to me.
In addition, I am so moved by your younger daughter’s sincerity and courage.

The parents, reading his letter, felt so ashamed of their silly deed.

“What a nice and faithful general he is!”

They, admiring him so much, sent their elder daughter to him.

At his first sight, he noticed that she was quite different in appearance from what she used to be.

He said to her,

“Your figure changed because of time and illness, but the beauty in your heart will never change.”

She felt his deep love for her.
She thanked him all the more for his kind words and served him with all her heart.