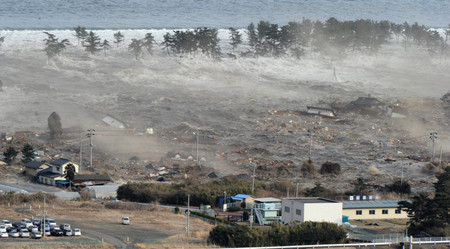 On the 5th of November, 1854, a village headman Gohei felt the earth rumbling and quaking.
His house was on a hill where he could overlook the village in Arita, Kii (Wakayama Prefecture).
Sensing danger, he burst away from the house.
It was getting toward dusk.

He didn’t think it was a violent earthquake but he felt ominous of disaster from a long and gentle tremor which continued for a while.

When he looked down at the village, the foot of the hill, and shifted his eyes from the seaside to the offing, he unconsciously cried, “Ah!”

Something horrible was happening in the sea.
He strained his eyes.
He saw the waves silently ebbing toward the offing.
A wider beach and some black rocks appeared on the surface of the seashore.

In the meantime, villagers at the foot of the hill were busy preparing for their harvest festival.
Nobody seemed to imagine such a thing was happening.

Gohei predicted that huge waves like mountains would soon surge from the offing.
But he had no time to run down the hill to make all the villagers evacuate up to the hill.

Suddenly, an idea flashed into his mind!
He looked at the yellow stacks of ripened rice straw.

“They may save the lives of my four hundred villagers!”

He rushed into the house and then jumped out with a burning torch up in his hand.

He set a fire on the golden stacks one after another.

Gohei, a sixty-year-old man, ran around from stack to stack like a madman.

Having finished setting fire on all his harvest that year, he threw the torch away and stood there looking at the offing as if he had lost consciousness.

A man cried, and rang the fire bell fiercely.

Hearing the bells, the villagers looked up at the hill.

All the villagers, men and women, the old and the young, children also, ran up to the hill, with water in a tub and a stick in each hand.

Gohei was looking down at the villagers running up to the hill like a long procession of ants.

About 20 young men reached the site first, and started putting out the fire.

Gohei, stopping them from fighting the fire, said,

“I would give anything if all the villagers could come up on the hill here in time!”

“Shoya-san, what on earth are you saying?”
they asked.

“You’ll find out soon. Have all the villagers come up here?”

He started counting the villagers, pointing at them one after another.

He pointed out at the sea.
They saw a thin and dark thread lying on the sea in the twilight.
The thread gradually grew thicker and thicker, wider and wider, surged toward the village at a tremendous speed.

Millions of sharp waves flocked to the village like an army.
In a twinkle, the cliff of the seawater like a mountain, with a roar like thunder, reached the village under their eyes.

The huge monster swallowed the village in the twinkling of an eye.
Houses, bridges…all the things were being swallowed by the tremendous power.

Nobody on the hill could speak a word.

The stacks of rice straw went up in flames by wind, and made the hill brighter.

The villagers, stunned and shocked, were only looking down at the ruins that were perfectly taken away by the devil.
Cold winds blew toward them from the sea.

Having finished his duty, Gohei was standing still there in a daze with tears in his eyes.

On March 11th, 2011, a huge earthquake occurred in Tohoku and Kanto area, and the gigantic tsunami triggered by it swallowed cities, towns and villages.
A great number of people lost their lives, and others, their assets and properties in a moment.

We express our sympathy to the victims, and pray for the souls of the dead.

From “A Living God” by Lafcadio Hearn, and “Fires of Stacks-of-Rice-Straw” by Tsunezo Nakai.