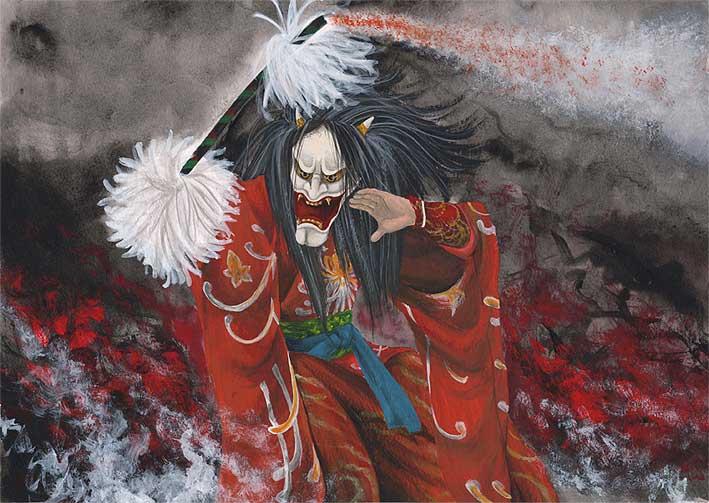 Long long ago, there was a large field called Adachi-ga-hara in the Tohoku province.
It was said an ogress, who caught travelers to eat, lived there.

One day a priest on a journey passed through this field.
It was already dark.
He was so tired and hungry that he felt it impossible to keep walking any more.
He needed a place for an over-night stay, but he couldn’t see any houses in the field.

When he was at a loss, he saw a light in the far distance.
He staggered toward it in one way or another with the help of his stick.
It was a solitary shabby house with broken fences and warped pillars.
Peeping through an opening in the wall, he saw an old woman spinning threads beside a broken lantern.

He asked her over the fence,

“Excuse me, but I’m a priest on a journey.
I lost my way in this field.
I’m so tired and I can’t walk anymore.
Would you mind my staying with you for a night?”

The woman looked up at him and said,

“I feel great sorrow for you, but this is a solitary house in the field.
Besides I don’t have enough futons for you.
Sorry, I can’t put you up.”

“Don’t worry about a futon for me.
All I’m asking you is just to let me in to prevent the cold at night.”

“All right, if you don’t mind this dirty hut, please come in and make yourself at home,”
she finally said.

“It’s very kind of you to say so,”
the priest walked in, taking off his sedge hat and warajis, Japanese straw sandals for traveling.

“I’m quite a stranger here.
I’m so lucky to meet you.
When I got lost, I didn’t know what to do or where to go.
You are very kind to me.
It seems as if I saw Buddha in Hell.
Thanks, Buddha! Namu Amida Butsu.”

The old woman, smiling at him, put the spinning wheel aside and said to him,

“How confused you were!
Come and sit here near this hearth.”

“Thank you so much for your hospitality.
Oh, it’s warm.
I’m chilled to the bone. Thanks, Buddha!”

“That’s too bad. Wait for a minute until I can prepare something.”

Saying so, she stood up and prepared for his meal, which the priest was served and very satisfied with.

They enjoyed talking with each other by the hearth until the fire was almost burned out.
It was getting colder but there was little firewood left.

The old woman said to herself,

“That’s too bad!
We are short of firewood.
I’ll go to the mountain to get some firewood.
Can you stay here alone?”

The priest said to her,

“I’ll go get some instead of you.
I’m younger than you.”

“You’re my guest. You can stay here.”

She was ready to leave, but suddenly she turned around and said,

“Listen! I have something to tell you.
You must keep still on the place you were sitting.
The back room is my bedroom.
You mustn’t look into it.
Never! If you did so, I wouldn’t forgive you.”

“All right. I’ll promise you not to look into your bedroom.
I’m a priest. I’ll keep my promise.
Please go out without worrying about it,”
he said.

“Never look into it,” she made sure.

“Never look into it,” he repeated.

She rushed out toward the mountain.

The priest sat alone near the hearth in the cold house.
He was concerned about the unsettling words she had said.
The more he thought about it, the more his curiosity was aroused.

The more times we are told not to see, the more deeply we want to see.
He was also eager to look into it and stood up.
But he remembered her warnings again,

“You must keep still on the place you were sitting.
The back room is my bedroom.
You mustn’t look into it.
Never! If you did so, I wouldn’t forgive you.”

He seated himself again.
But he had another thought,

“Though she said so, she isn’t here now.
If I look into it and hold my tongue, nobody will know it.”

He stood up and sat down repeatedly until at last he decided to look into the room.

“Never mind. I’ll catch a glimpse of it before she comes back.”

As soon as he opened the door of the deeper room, he was attacked by the strong odor of blood.
Oh, my Buddha!
A mountain of human bodies were piled up in a corner of the room; heads, legs, arms, half the bodies and so on.
The floor was dyed by the sea of blood.

The priest fell on his buttocks and screamed.
He trembled with fear.
His knees buckled under him for a while.

“This…This is the very house where the ogress lives.
That kind old woman will unveil herself, come back and catch me to eat at a bite.
I can’t stay here. I must run away without delay.”

He managed to stand up and took his belongings and rushed out of the house and ran like a rabbit into the field without looking behind.

“Hey, don’t run away. Wait!”
Before long he heard someone calling.
He pretended not to hear it and kept on running.

“Stop! Stop!”
The voice of the old woman came nearer to him.
Listen! Why didn’t you keep your promise!
I told you never to look into it, but you did look into the room.
I’ll never forgive you.”

Hearing this, the priest ran much faster.

Soon it began to dawn.
It was lucky for the priest.
Generally ogres and ghosts hate the sun light.
The ogress, seeing the rising sun, began to be fade and at last disappeared somewhere.

The priest continued his pilgrimage to the countries.