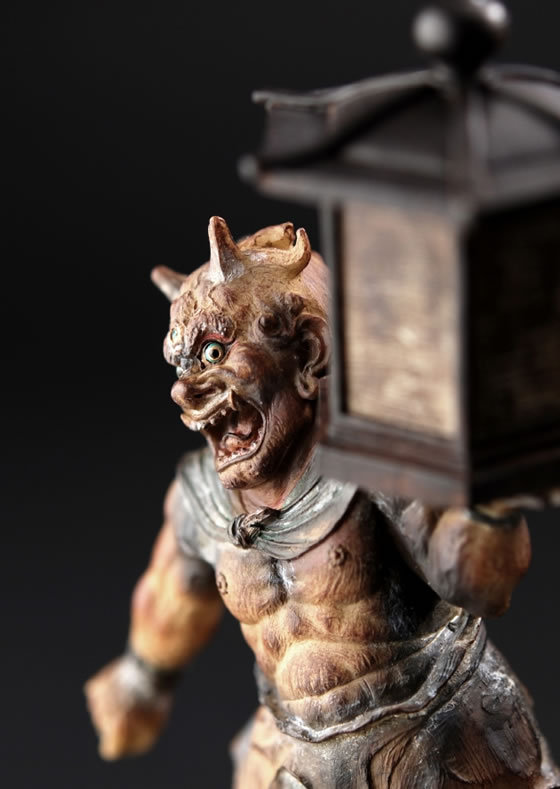 Long long ago, there lived a giant ogre and its company in Mt. Oh-e in Tanba-no-Kuni.
They often haunted villages and towns to kidnap beautiful girls.

One day, a rich family’s daughter disappeared after an ogre appeared in a town.

Her father feared that she had been kidnapped and taken to Mt. Oh-e.
He hurried to the Emperor’s palace and implored him to rescue his beloved daughter from captivity.

Those ogres’ evil acts brought the Emperor agony.
He listened to the father’s entreaty and ordered Minamoto-no-Yorimitsu, one of the Military leaders of the Heian Period,

“Yorimitsu, you must hear about the ogres in Mt. Oh-e.
They have appeared to kidnap people, especially young ladies these days.
I order you to go there, and get rid of the vicious beasts immediately and rescue any young girls still alive from them.”

“I’ll be glad to obey your order, even if my life is in danger,”
he said.

He called four of his strongest and the most efficient retainers, and explained their mission to them.

“It must be very difficult to kill those ogres and rescue the young ladies safely.
At first, the important thing is to disguise ourselves in Yamabushi, (itinerant priests) so that they can’t find us out easily.
Next, we should find out what part of the mountain they inhabit.”

They visited three shrines and prayed for their success.

They climbed up the rocky spot of the mountain and there they found three old men on a huge flat rock.

“What on earth are you doing at such a lonely place?”
Yorimitsu asked them,

“There’s nothing suspicious about us.
We had our wives and daughters kidnapped by ogres.
We are watching for the chance to get revenge on them and get back our family alive.
By the way, you don’t look like ordinary ascetics.
I assume you all have come here under the Emperor’s command in order to kill them,”
he continued,
“Be careful, they are so strong that we human beings can never defeat them.
I’ll tell you how to do so.
As they are always drinking, especially their head ogre, he is called ‘Drunken ogres’.
So you should attack them while they have fallen asleep after drinking.
We have a bottle of mysterious sake here.
Though it is medicine for us and makes us healthier, it will, on the contrary, make ogres lose their power if they drink it.
They can neither walk nor be awake.”

The oldest man took a bottle of sake and a helmet out from his bag.

“This is called a ‘Star helmet’.
While you are wearing it, you can cut off ogres’ heads with ease”

The three old men stood up and said to them,

“How do you figure you can enter their palace?
If you want us to guide you, we’ll lead you to the nearest place where the ogres live.”

Following them, the five warriors reached a narrow valley through a long rock carven tunnel.

The oldest man said to them,

“We’ll return from here.
When you go up along this small river running through the valley, you’ll see a beautiful lady, who’ll tell you the way to their palace.”

Then the three old men vanished into mist.
The warriors realized they must have been gods from the shrines.

The party indeed met a young lady after about an hour’s walk, who was sobbing while washing something red by the river,

“Can I ask you who you are, and why you are sobbing?”

The lady looked surprised, but answered,

“I used to live in the Capital but I was kidnapped by ogres and taken here.
I miss my mother, my father and my family.
But no man has come here before you, because they have been afraid of the ogres.
Please take me back to my home.”

He said to her gently,

“Will you tell us more about the ogres?”

“Ten young women besides me are captured.
We alternately have our blood taken for their drink every day.
I have a routine of washing clothes stained with blood.”

“We promise you to kill ogres and help out all of you.”
Yorimitsu said.

“What joyful news! It’s like a dream.
Near the source of this river, you’ll see a castle made of iron.
Two ogres always guard its front gate.
Every night they hold a banquet for the Great Ogre, their leader, who is so huge and so strong and has a horrible face with two horns on his head and two fangs in his mouth.
He is always guarded by four strong ogres.
However, after they drink so much, they’ll fall sound asleep.
That’s the best chance to attack them.”

The five men resumed walking for their adventure.

In fact, there stood two ogres in front of the Iron Gate.
One said to the other, when they found the party of itinerant priests.

“We can see delicious prey coming in person.
How lucky we are!”
said the first ogre, and tried to jump on them.
The other one cried,

“Wait! The first thing to do is take them alive to our Great Ogre for his dinner.”

The two ogres led the five men to a huge room in the castle.
Soon in front of them a gigantic ogre appeared.

“You, human beings, what made it possible for you to come here even though it is very difficult for even a bird to get here?”

Yorimitsu said to the ogre calmly,

“We are only itinerant priests, training in this mountain.
We were completely lost here in this mountain and happened to get here.
We are very happy to meet a Great Ogre like you.
I owe this to Buddha.
By the way I have a favor to ask of you.
Would you give us lodging for tonight?
I have a bottle of nice Sake.
Why not try to have a drink of it?”

He showed the sake bottle to the Great Ogre.
Looking at it, the Ogre smiled at him.

“Indeed, it looks nice.
Make yourself at home here tonight.
I also have nice sake to serve my guests.
I’d like you to taste it.”

The Great Ogre had one of his followers bring a huge sake cup filled with red liquid.

“You’re the first one to drink this,”

Yorimitsu took a shot of sake, though he didn’t want to.

“Next,”
The Ogre invited the other men to drink.

“It tastes good!”
They pretended to be satisfied with it.

The Ogre looked very pleased with them.

“Bring our delicious food for them,”
he ordered.

Two ogres put something such as an arm and a thigh of human beings on the chopping boards.

“Fillet it for my guests!”
he told them, and one of the ogres tried to chop it.

“Wait! I am a good cook.”
Yorimitsu took out his dagger and chopped the meat a little and began to eat it.

“I’ll eat it, too.”
Other soldiers also began to eat it.

The Great Ogre looked impressed by their courage to eat it.
He said,

“It’s a great surprise for me that you like this kind of sake and food.
Who in the world are you?”

“It is natural you should think so, but we, itinerant priests, are not supposed to reject what we are served.
We thank you for your wonderful hospitality.”

Yorimitsu made a deep bow to the Ogre and held out the bottle of sake.

“This is one of the most delicious sake made in this country.
Please try it.
I’ll taste it first before offering it to you.”

Yorimitsu poured a little into the huge sake cup and had a quick drink.

The Great Ogre said to him cheerfully,

“I’ll have it, too.”
He drank it several times as it tasted delicious, and urged his ogres to drink.

“Delicious! My ogres, this is the most delicious sake I’ve ever had.
Enjoy drinking it together and call the young ladies here to make them dance.”

“Please help yourself to this sake!”

The ogres enjoyed the sake to the fullest.

The sake soon made the Great Ogre and his ogres lose their power, and fall asleep.

Yorimitsu put on that ‘Star helmet’ and pulled out his sword.

He cut off the Great Ogre’s head, then it flew to Yorimitsu’s head and tried to bite it, but the helmet prevented it from snapping his head, while his five soldiers cut off the five ogres’ heads respectively to death.
The battle was over in a moment.

“Young ladies, the ogres have been completely exterminated.
It’s quite safe for you to go out.”

The captured young ladies came out of the dungeon.
They were moved when they knew all the ogres were killed.
They sat near the warriors and cried with joy.

“Is this true, or isn’t it a dream?”
They hugged each other with great joy.

Yorimitsu found a mountain of treasures in the ogres’ palace.

After the five warriors returned to the Capital, they were invited to the Emperor’s palace and given high positions and many rewards for their brave achievement.