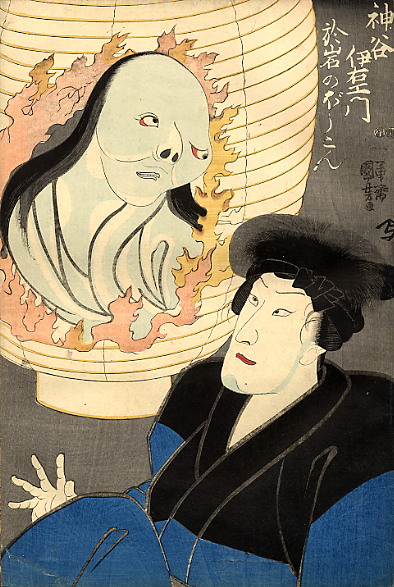 Once upon a time, about 300 years ago, there lived a girl of a rich familly named Oiwa in Edo Yotsuya_samoncho.

Unfortunately, she was attacked with smallpox when she was 5 and her face became ugly and pockmarked.

Her father felt pity for his teenage daughter and introduced her to a ronin.

The ronin was tired of being poor so he said he would love to marry Oiwa even though she had an ugly face.

The husband was very faithful to his father-in-law and took good care of Oiwa as well.

He worked hard even after her father died.

Therefore, he was very likable to men in the upper classes.

Especially, there was the chief in the upper class who often invited the husband to his house.

As the husband was invited to the house many times, he fell in love with a maid who worked in the house.

The maid also fell in love with the husband who was earnest and manly.

But if the husband separated from Oiwa, he would be demoted to a ronin again.

The husband felt so stressed not to be able to stay with the woman he loved and he couldn’t bear to see Oiwa’s ugly face.

Eventually, he sold some of the furniture to have a drink and he even didn’t go to work sometimes.

Oiwa felt annoyed and went to talk to the chief who was friendly to her husband.

“Hide yourself somewhere for a while.

I’ll go talk to your husband to change his mind and make him go pick you up.”

Oiwa listened to his words thankfully and soon went to a distant old samurai residence to work as a maid.

The husband was so glad saying,

Then he got married with the maid who served for the chief.

The good-natured Oiwa was looking forward to the day when her husband was coming to pick her up.

Many years had passed but her husband never came to pick her up.

One day, a tobacco vendor who used to come over to Oiwa’s place happened to come to the residence where Oiwa worked.

On hearing that, Oiwa got pale and said,

“Curses on you. How could you cheat on me?”

She rushed out of the residence with her bear feet.

And then she went missing.

Since then, however, some strange things had happened to the husband and around him.

While he was sleeping, a ghost of Oiwa came to them and stared at them like cursing on them.

And their baby suddenly became ill and then died a painful death.

Also, the beautiful face of his new wife gradually became ugly that looked similar to Oiwa’s

At last, the two died in madness.

On top of that, the chief who deceived Oiwa was killed by Oiwa’s curse.

Since then, people who lived in Oiwa’s house had died of unknown causes, so people were so afraid of Oiwa’s curses that they built a Inari shrine to console her soul in the place where her house used to be.

It is said that Oiwa hasn’t cursed on anybody since then.