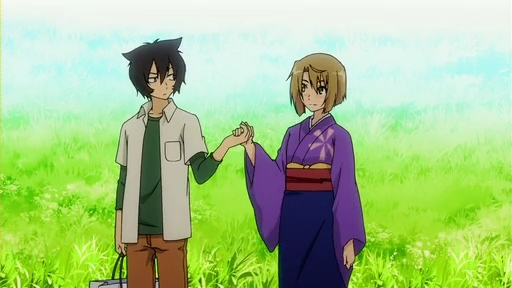 Long long ago, there lived an old man in a mountain.
One day he went to the mountain to cut some firewood.
When he climbed the mountain, a little pretty bird flew to him and plunged into his mouth.
After that, he found a long hair growing from his navel, so he pulled it.
Then he broke wind, making the sounds.
“Ao-ao-wa, chio-chio, goyo no takara matsu chinchikin.(A green pine tree is the pine tree of treasure).”

He returned home and told the story to his old wife.
“I can make beautiful sounds by breaking wind.” said the old man.
“Please try to break wind now.” asked the old wife.
He broke wind and made the same sounds.
The lord heard of this.
He sent a message to the old man, saying:
“I hear you can make beautiful sounds by breaking wind. Come to me and try for me.”
The old man went to his big house and sat trembling in front of the lord.
The lord ordered him to break wind at once.
The old man succeeded in breaking wind several times.
The lord was very satisfied and gave him much money.

The old man came home with much money.
The old wife had never seen such a lot of money before.
The wicked old man and his old woman lived next door and overheard the conversation, and asked the old man what had happened to him.
The old man told him the whole story.
He caught a little bird in the mountain and cooked and ate it.
He went to the lord, but he could not break wind.
What is worse, he dropped feces.
He was taken to the jail.