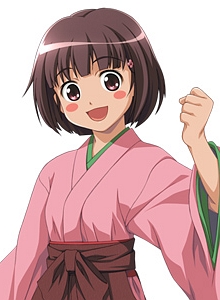 Long long ago, there lived a beautiful girl called ‘Suzu’. She was always playing with sparrows in a field as her mother died so young.
Her father got remarried to a beautiful lady and they had a daughter.
Her stepmother was not so kind to Suzu while she was very kind to her own daughter.
Soon her father died too.
She was no more needed by her stepmother and was ordered to do a lot of housework every day.
“Suzu, clean the house and wash clothes and make meals and…”
One day in the evening she was ordered to go picking up chestnuts in a mountain.
While she was working, it became dark and she got lost in the mountain.
“Where am I? I was lost. I don’t know which way to go.”
Then she saw a light in a distance.
She visited an old hut, where an old woman was sitting by a fireplace.
“I was lost in the mountain. Would you mind my staying here this night?”
“Not at all.” said the old woman.
But to her surprise, she turned out to be a horrible mountain-monster.
“You seem to be a good girl. Get rid of lice from my hair.”
She said, ‘Yes’and did as she was told to though she was afraid.
She removed not only lice but snakes and centipedes out of the monster’s hair.
“You are a good girl. I feel comfortable.”
The monster liked her very much and said to her,
“You are a good girl. I’ll give you this magic box. If you want something, open it and say what you want.
She returned home safe, but her mother was not pleased at her safe return.
“You came home alive without chestnuts.”

The Festival Day came.
She heard the happy sound of drums, flutes and so on.
Her mother took her daughter to the Festival.
Before leaving home, she sprinkled rice in the garden and ordered Suzu.
“Pick up every rice without soil. Unless you finish it, you can’t come to the Festival.”
When, crying, she was picking up sprinkled rice, many sparrows flew down in the garden and helped her with her task.
“Now you can go to the Festival.”said the sparrows.
“My clothes are very dirty. I’m ashamed of it.”
“Magic box. Magic box.”said the sparrows.
“I want a Kimono, Dear mountain-monster.”
When she opened the box, a beautiful Kimono came out of it, when the monster on horseback in herself appeared and presented her a piece of Zori, or Japanese sandals.
“Now you can go to the Festival on this horseback. You are so beautiful.” said the monster, giving her Zori.
She was so beautiful in Kimono that every one in the Festival looked at her.
“Who is she?” asked every one each other.
The Choja’s(millionaire) son especially got interested in her and made her sit next to him on a balcony.
“Look, Mom. My sister is sitting over there.” said the young sister to her mother.
“Don’t kidding me. She must be princess of a country.” said her mother.
Many people carrying a beautiful MIKOSHI(portable shrine) passed in front of her.
She was so happy as if she were in a heaven.
The Choja’s son and Suzu were fallen in love with and looking at each other.
Suddenly she jumped up and said to him,
“It’s time. I’m sorry I must say good-by to you.”
She had to come home ahead of her mother and sister.
She jumped on the horse and left the Festival like an arrow, when she dropped one of her sandals.
The son picked it up and was thinking of something for a while.
One day the men of the Choja’s house came to her house.
“We are looking for a girl who was wearing this sandal at the Festival.”
“Oh,this is hers.” said her stepmother, pushing out her daughter.
But the sandal was a little big for her to put on.
Then Suzu ran out of the house with the other sandal in her hand.
“Oh, You are the lady the son is looking for.”
She went to the Choja’s and got married to the son.
Suzu was very happy as if she were in a heaven.