Tiger on the screen

Tiger on the screen 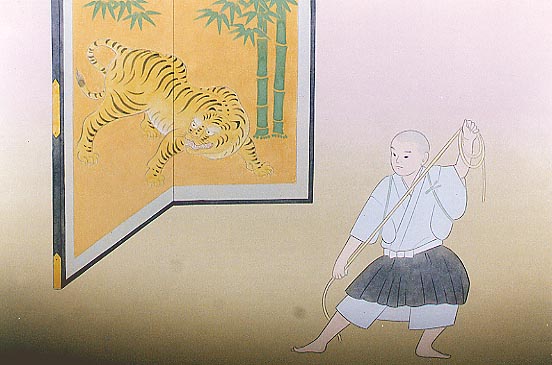 Long long ago, there was a wise Buddhist priest called ‘Ickyu Zenji’ in Kyoto.
This is one of his episodes in his childhood.
Hearing of his wisdom, a feudal lord called him to his castle and put him to a test.
“I have one problem I’d like you to solve.” said he, taking him in front of ‘Tsuitate’(Japanese paper screen used for hiding a room) on which a big tiger was painted.
“We are now in trouble, for this big tiger gets away from the screen and surprises us every night. I do hope you’ll catch and tie the tiger with a rope when it gets away out of it.”
“Do I catch this painted tiger?” Thinking a little, he said to the lord.
“Well, OK. I’ll do it.”
He tied a Japanese towel around his head.
“Your Honor Lord. Would you give me a strong rope to catch the tiger with?”
Having a rope, he stood ready in front of the screen to catch the tiger.
“Your Honor. It is very dangerous to stand in front of it. Why don’t you go behind the screen and drive the tiger out of it?”
“What, What? Do you say I drive the tiger out of the screen?”
“Yes, sir. I ask you so. If you can’t drive the tiger out, I can’t catch it with a rope.”
“Well… I can’t do it.”
The lord couldn’t help approving his quick-witted wisdom.